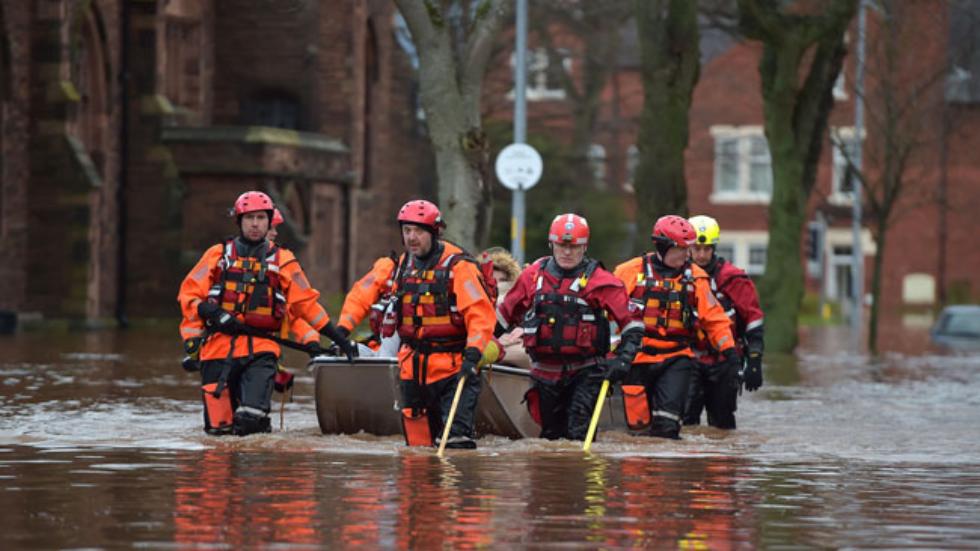 Roads have been closed throughout the North and Scotland as Storm Desmond caused road chaos, landslides and flooding. (Owen Humphreys/PA via AP)

Storm Desmond, the fourth named storm of the season, arrived Friday and continued into Saturday, prompting the issuance of the first red “take action” warning from the U.K. Met Office since Feb. 12, 2014 for parts of the north of England and the south of Scotland.

Shap, located just outside of Lake District National Park in the north of England picked up a whopping 10.34 inches (262.6 mm) of rain from Storm Desmond early Friday into early Sunday, according to the U.K. Met Office. Nearby Keswick measured 7.02 inches (178.4 mm) in that same 48-hour period. The heavy rain caused rivers to flood homes and forced evacuations in Cumbria and Northumberland, the U.K. Met Office reported.

Met Ã‰ireann, the Irish Meteorological Service, also issued red warnings for rainfall for Connacht, Donegal, Clare and Kerry. Up to 3 inches (75 mm) of rain had already soaked parts of Ireland as of Saturday afternoon.

Here’s how the horse came to be stranded in #StormDesmond floodwaters at Ovingham https://t.co/yXUhvyrNWc pic.twitter.com/aPYAs951a1

Red alerts for heavy rain or flooding were also hoisted in far southern Norway and southwest Sweden. Eik Hove, Norway, had picked up 7.91 inches (201 mm) of rain over the past 48 hours through Saturday evening.

Storm Desmond tapped an atmospheric river, a long, narrow plume of deep moisture from the tropics into the mid-latitudes, keeping it parked over parts of Ireland, the U.K. and southern Scandinavia, a prime recipe for excessive precipitation.

In this case, the atmospheric river was over 5,300 miles (8,500 kilometers) long from the western Caribbean Sea to southern Sweden.

The persistent, moist west to southwest winds pounded west-facing hills and mountains of the northern U.K and southern Norway.

The storm has since ended, but another Atlantic storm, though not as wet, was expected to sweep into the area Monday.

Police in north London are investigating the death of a man who they believe was caught in a gust of wind and blown off a footpath into the side of a moving bus near Finchley Central Station, reports The Guardian. The 90-year-old was pronounced dead at the scene.

Evacuations were prompted in parts of Cumbria, including Appleby-in-Westmorland, Keswick and Kendal, with water up to three feet deep in spots. Motorists trapped in floodwaters had to be rescued in the north of England’s Lake District.

Efforts to rescue a horse stranded in a flooded field in Ovingham, Northumberland, had to be canceled, according to the Chronicle. Firefighters were unsuccessful in reaching the horse, which was in floodwaters up to its middle. A man who attempted to save the horse himself became stuck and had to be rescued by a crew with the use of an inflatable boat. The man was forced to hold onto a tree for safety in fast flowing water until the team reached him. The horse has been trapped in the water since the River Tyne burst around 2 p.m. local time Saturday.

Torrential caused rapid rises on the River Ouse in Yorkshire, the River Eden in Cumbria, the River Tyne in Northumberland and in parts of Lancashire, the Cheviot Hills and the West Pennines, according to the U.K. Met Office.

According to BBC, a driver narrowly escaped after his bus fell into the river after rain collapsed the Old Laxey Bridge on the Isle of Man. Police say the man was not injured. The lower Laxey area remains closed.