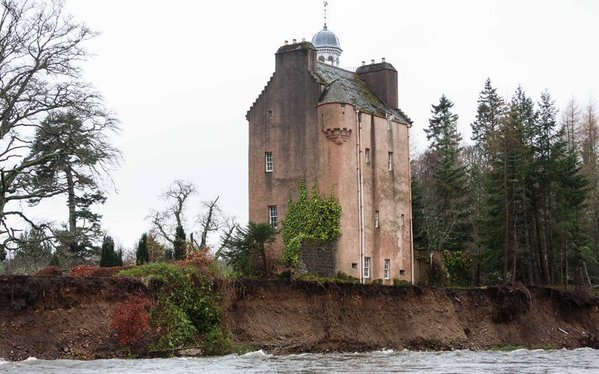 The Queen’s neighbour at Balmoral has been forced to leave his 450-year-old castle after flood waters demolished the riverbank that protects the ancient property.

Meanwhile, a helpless Prince Charles could only watch in horror as his beloved gardens on his Highland retreat nearby were washed away in last week’s floods.

Huge swathes of his carefully tended Scottish estate, Birkhall, were destroyed when the River Muick burst its banks, leaving him “devastated”, sources said.

Today, as most Britons return to work after the Christmas break, it will be wet and miserable. Britain is on the brink of further flooding, with the Met Office issuing warnings for rain in Scotland, Wales, and the North-East and South-West England.

Charles told locals that Birkhall’s gardens had been “ruined” when he and the Duchess of Cornwall made an impromptu visit to those affected by the floods.

Butcher John Sinclair said: “I asked how Birkhall was. He said Birkhall house was OK but the garden was devastated, but that was the least of his worries. Charles was just concerned about the whole village basically. He couldn’t believe it. He was devastated.”

The gardens at Birkhall run down directly to the Muick. While the house itself, which once belonged to the Queen Mother, was safe because it sits at the top of the hill, its historic gardens have been destroyed.

A source said: “It’s a scene of total devastation, which is very upsetting for the prince as he puts his heart and soul into the gardens, which were also the pride and joy of his beloved grandmother.”

Those close to Charles said last night that his main concerns were for the thousands who have lost their homes and livelihoods.

“While it is personally distressing, it is the least of his concerns,” said one. “The prince is being kept constantly updated about flooding in the whole of the country and is looking at ways he can help both now and in the future.”

The destructive impact of the raging torrents was most evident at Abergeldie Castle, next to Balmoral, which now sits perilously close to the riverbank after a huge section of the ground was washed away. John Gordon, the 21st Laird of Abergeldie, had to leave when he discovered only 5ft of ground remained between the ancient castle and the river.

Queen’s neighbour next to Balmoral flees as castle is left on the brink of collapse https://t.co/uiHi5E9eU8 pic.twitter.com/FFQAced80A

Concerns have been raised that the little ground left may not be enough to support the property. The Baron of Abergeldie, 76, has moved into a house on his 11,687-acre estate and is said to be too upset to speak about the flood.

His grounds are enclosed by Balmoral on three sides. The baron is a close personal friend of the Queen and the royals rent out his land for hunting and fishing. One neighbour said: “The castle is teetering on the brink. God knows what will happen if the Dee rises any further.

“The castle is in imminent danger. It’s not only a home, it’s a listed building so losing it would be a national tragedy. Nothing can be done while the river is in spate. It’s just thundering down. It smashed the mature trees at the back of the house like matchsticks. It also took 250 feet of the bank away and all the ground at the back. The river is right at the back door.”

Scotland was on the brink of more devastating floods last night, while in North-East England a yellow ‘be aware’ warning for rain is in place.

In Cornwall the wreck of a ship which ran aground nearly 130 years ago has been exposed in the wake of the storms.

The Jeune Hortense, a French brigantine, was swept on to the beach at Long Rock in 1888, but every few years the sand is washed away and her hull is exposed.
Along the coast in Devon stormy seas have gouged out a 15ft by 6ft hole on the promenade in Teignmouth.

In York the River Ouse is expected to remain high for several days. So too will the River Severn, bringing a risk of flooding in Shropshire, Worcestershire and Gloucestershire.