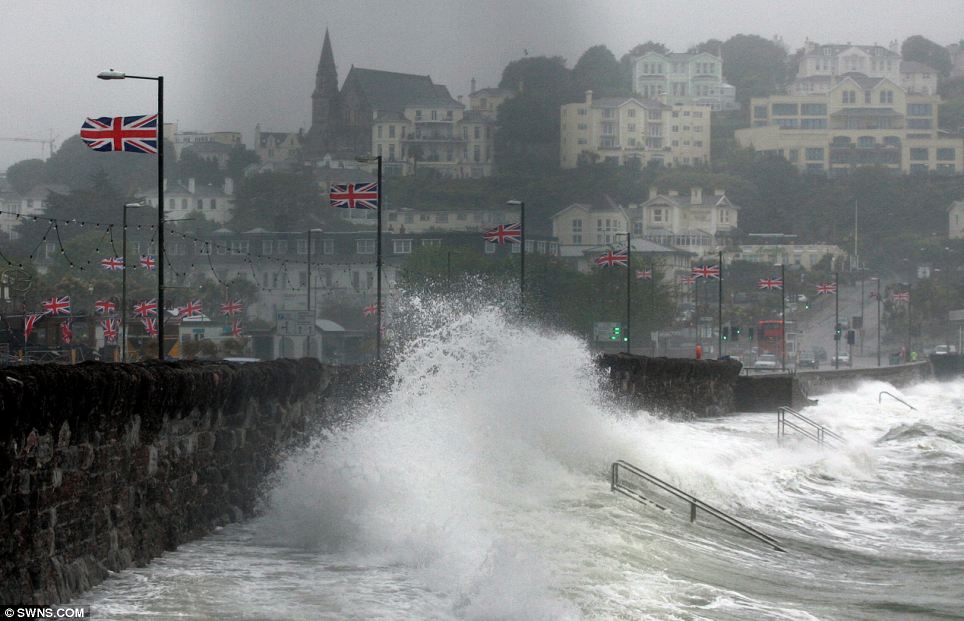 In New Zealand we love talking about the weather whether it’s good or bad but in the UK it seems it can be a sore point however somehow they’re happier overall than our trans tasman neighbours.

Whether the weather is too hot or too cold, Britons just love complaining about it.
So much so, in fact, that a total of four months Poms moan about the elements during their lives.
The average Briton whinges about the climate four times a day, for a total of eight minutes and 21 seconds, according to a survey.

Britons spend four months of their lives complaining about the country’s unpredictable weather.
However, most admit they enjoy a good weather whine because it makes them feel better.
It’s the nation’s favourite ice breaker – more than three times more popular than any other subject including, work, holidays and football.
The most common complaint is that the British weather is too unpredictable, a bugbear for 31 per cent of people, followed by too cold (26 per cent) and that it rains too much (19 per cent), according to the poll of 2,000.

There’s been plenty to groan about this year thanks to the late arrival of spring – and there’ll be more opportunities to come, with forecasters predicting chilly weather in the weeks ahead.
Those aged 25 to 34 admitted moaning the most, spending around nine minutes 44 seconds complaining every day. While those aged over 65 spend seven minutes and 37 seconds.

The study by home and garden retailer Wilkinson found that, despite enjoying a grumble, only a fifth of Britons think discussing the weather is actually interesting, with two thirds telling researchers it is dull and repetitive.
However, most owned up to doing it anyway.
They certainly have plenty of ammunition, with eight out of ten saying their leisure plans had been ruined by the weather in the past year.

Moaners: The most common complaint is the weather being too unpredictable, followed by it being too cold.
Newcastle is apparently the worst place for weather gripes, with residents complaining for an average of ten minutes 20 seconds a day, followed by Sheffield (nine minutes 50 seconds) and Birmingham (nine minutes 42 seconds).
Neil Fairhurst, from Wilkinson, said: ‘Talking about the weather is a national obsession and our results show that we moan about it more than anything else.
‘Complaining about the weather is many people’s way of dealing with an often miserable outlook – a problem shared is a problem halved.
‘It has been very interesting to lay bare for the first time the average length of time we will spend discussing the weather. Four months is a significant chunk of anybody’s lifetime.’
Just over a quarter of adults (26.6 per cent) said they simply wrapped up warm and carried on with plans despite the weather, but the rest avoided outdoor activities altogether.
Mr Fairhurst added: ‘Our results will lead some to think that many of us have become too soft and we are in danger of raising a generation of cotton-wool kids.’
Despite weather moans, a survey has found that Britons rate their lives as more satisfying, happier and more worthwhile than Australians.
The findings – despite Australia having the strongest economy in the developed world – have prompted much hand wringing and angst Down Under yesterday.
Having been formally branded the bigger whingers, the Australians did what they apparently do best – they moaned about it!
‘So it’s official: Australians have overtaken the Poms in the whingeing stakes,’ wrote Michael Pascoe in the Sydney Morning Herald.
‘Never mind Australia being an island of great relative prosperity, calm and opportunity in a stormy sea of developed world recession and austerity,’ he added.

The survey of more than 1,000 Australians compared lifestyle scores with a similar poll carried out last year by the UK’s Office of National Statistics.

The National Australia Bank Consumer Anxiety Index found that Australia’s overall wellbeing score came in at 6.2 ratings points out of 10, trailing well behind a wellbeing score of 7.3 recorded for Britons a year earlier when the UK was facing the prospect of a double-dip recession.
The results of last year’s survey showed that British respondents rated their lives as more satisfying than Australians, recording lower anxiety levels and a higher sense of self-worth.
Australians recorded weaker scores in the ‘satisfied life’, ‘overall wellbeing’, ‘happy yesterday’ and ‘not anxious yesterday’ categories in the new poll.
The British had average satisfaction levels of 7.4 compared with 6.0 in Australia.

Australia is still bathing in the healthy economic forecast from the International Monetary Fund predicting its economy to stay strong and for low unemployment – currently at about 5% – to continue.

The British pound was worth more than $AUD2.50 a decade ago but now buys just $AUD1.45.

Other polls have found that Australian consumer confidence is far lower than in some countries that are suffering recessions and soaring unemployment.
‘Just because you’ve got a strong economy, it doesn’t mean that the people within that economy feel that they’re happy or their wellbeing is high,’ said the National Australia Bank’s chief economist Alan Ostler.
Mr Pascoe, however, had another theory.
‘An alternative view would be that the Poms simply don’t know any better. Good heavens, they nearly all follow soccer, just for a start,’ he wrote.
‘It’s not our fault that the Poms don’t realise how stuffed their economy and prospects are,’ he added. ‘Or maybe it is just the cricket.’