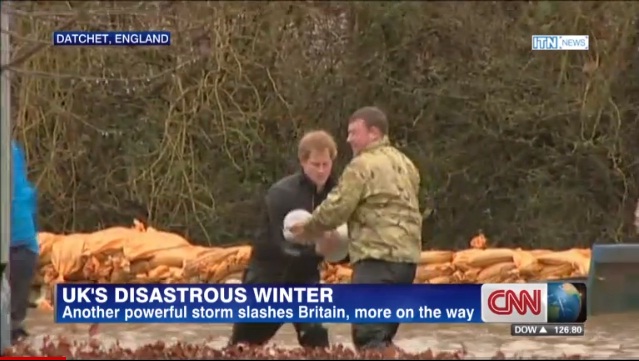 After a wild and stormy night that claimed two lives, many communities in southern England face a high risk of flooding Saturday from still-rising rivers.

Severe flood warnings are in place along the Thames Valley to the west of London, as well as in southwest and central England.

The Environment Agency warned that flood risk will continue for at least another week.

An elderly passenger died Friday aboard the British-based cruise ship MS Marco Polo after it was hit by a “freak wave during adverse sea conditions,” according to the ship’s owner, Cruise & Maritime Voyages.

The rogue wave struck as the ship made its way into the English Channel en route from the Azores to its home port in Tilbury, southeast England, it said.

As high winds whipped southern England on Friday night, a 49-year-old woman was killed when the front of a building collapsed onto her vehicle in central London, police said. Two other passengers in the car were injured. Police said the collapse happened during bad weather, but they were unable to say if it was directly related.

On Saturday, amid increasing questions about the government response, Prime Minister David Cameron visited Chertsey, Surrey and thanked the military for its help during the crisis.

The Environment Agency reported that 16 severe flood warnings remained in place Saturday, meaning there is a danger to life, as well as 151 lower-level flood warnings in different parts of the country.

Thames Barrier, which is deployed to prevent the tidal river now flooding central London with devastating consequences, was shut for a record 16th consecutive time to help reduce flood risk along the Thames, according to the Environment Agency.

The emergency will continue over the coming days for the Somerset Levels and Moors, where river levels continue to rise, posing a further threat to those already affected by recent flooding, the agency said.

“Despite an improving forecast the risk of flooding will continue for many communities in southern parts of England over the next few days,” Paul Leinster, the Environment Agency’s chief executive, said in a statement.

More rain is forecast over the weekend, pushing river levels ever higher.

After the wettest January in England in 2Â½ centuries, February has so far brought little relief.

The River Thames has reached its highest levels for over 60 years in some places, bringing flood misery to thousands of people living in the Thames Valley.

The towns of Maidenhead and Windsor, where the queen has a castle, and communities in the counties of Surrey, Buckinghamshire, Berkshire and Reading are all at risk from the Thames.

Residents desperate to hold back the rising waters have sandbagged entrances to their homes and businesses.

Princes William and Harry lent their help to the flood defense effort Friday morning, as they joined soldiers who hefted sandbags in the village of Datchet in Berkshire.

As well as high river levels, saturated ground from weeks of heavy rain mean that there is nowhere for water to go.

Severe gales, large waves and high sea levels were expected to bring a high risk of coastal flooding to parts of the Dorset coast on Saturday, the Environment Agency said.

Other areas along the south coast of England will also be battered by extreme weather.

I have read and heard many a comment that global warming is to blame for the weather in the UK of late. A head Metservice man from the UK has dismissed this “speculatin” and says the reason for the damaging weather is the position of the jet stream. This is in fact the case in the US with the cause of the freezing weather being the same reason.

Now heads up and I know that the knockers and those who find hearing the truth very painful as they go about their stessful lives.

The US military have for many years openly admitted that controlling the weather is being done, and can be used as a weapon. Their facility for this is based in Alaska and is called HAARP, it is “officially” used to produce atmospheric experiments, but many have connected its use to Earthquakes and devastating weather events. The facility has been “on holiday” lately from its official work but those in the know have seen comment from the military that some experiments are being tailed off now, I wonder which ones they would be.

The floods in the UK countryside could have been prevented but the usual practice of river dredging had been stopped by the Greens which has lead to some of this flooding.

Now Agenda 21 is the official future plan for the planet and for you, me, and our famimissionlies, it comes from the UN and people should start taking notice of what it has in store for us all, unless we do something about it. One mission of Agenda 21 is to have folk dragged in from the countryside to live in high rise apartments in the cities, there the population can be better controlled and the countryside rid of this pest, yes the UN have labelled us as a pest, look it up its there for all to see.

Of course what better way to get folk out of the countryside than to have it flooded by the actions of the fascist Greens. Let us pay more attention to how Christchurch is redeveloped, it may well be a wee template.

Well thats my lot for now but please do research Agenda 21, it is a fact and not make believe. The truth will always be there no matter who dissagrees with it.