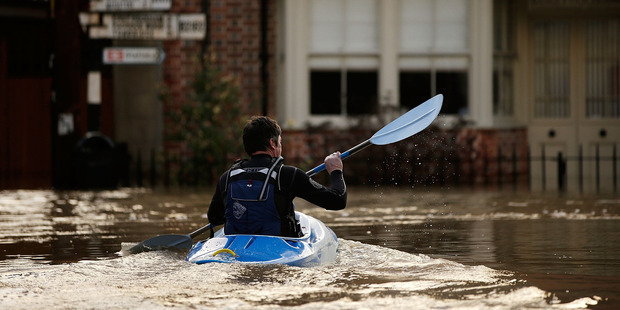 Tens of thousands of people had to abandon their Christmas celebrations as floods and power cuts continued despite the worst of the bad weather receding.

People in southern England were worst hit, with heavy rain and floods forcing hundreds to evacuate properties by boat as rivers burst their banks. Continuing power cuts also left thousands unable to cook or heat their homes, with energy distributors offering to pay for food and accommodation in local pubs, restaurants and hotels.

In addition to the floods, strong winds left roads blocked with trees and debris, making travel difficult not least for engineers attempting to reconnect power to the thousands of homes cut off. There were also delays and cancellations at railways and airports, leaving thousands of passengers stranded.

People have been advised to make the most of today because storms and heavy rain could bring a return of travel problems tomorrow. The wind is expected to pick up, bringing squally rain down on already saturated ground.

Emma Compton, a forecaster at the Met Office, said: “We are expecting gales around coastal areas, particularly in the west and higher ground, of around 95km/h. There is also much more rain to come [tomorrow] and a risk of flooding. We could see between 10 and 20mm of rain fall, and may even get up to 30mm which could again cause some disruption.”

Tim Field, of the Energy Network’s Association, said about 50,000 homes were without power, but he expected the majority to be back online today. The figure was updated to 24,000 last night.

A spokesman for the Environment Agency said it had cut the number of severe weather warnings from three to two, both in southwest England, but warned it would take time for water to pass through the system.

Seventy-six residents of the Little Venice Caravan and Marina Park at Yalding, Kent, were evacuated by boat and 4WD vehicles by the Maritime and Coastguard Agency and Kent Fire and Rescue as water levels on the River Medway reached chest height and caravans were flooded.

A further 90 people were evacuated from homes on the River Stour near Bournemouth. Police evacuated residents of the Ilford Bridge Home Park after a severe flood warning.

One resident Pat Tapply, 79, said: “I would just like to know how bad it is. All the presents are by my fireplace, I don’t know what they are but I hope they are still there when I can come back.”

The Environment Agency had 126 flood warnings in place across England and Wales, mainly in southeast England, the southwest and the Midlands. A further 218 flood alerts were also in place, with 90 in the Southeast.

The agency said 150 properties had been flooded in England, mainly in the south. Families had to be evacuated from homes in Dorking, Leatherhead and Guildford in Surrey, and 40 properties were evacuated in Godalming because of concerns over the height of the River Wey.

About 800 homes in the north of Scotland were still without power, mainly in Aberdeenshire and Elgin.