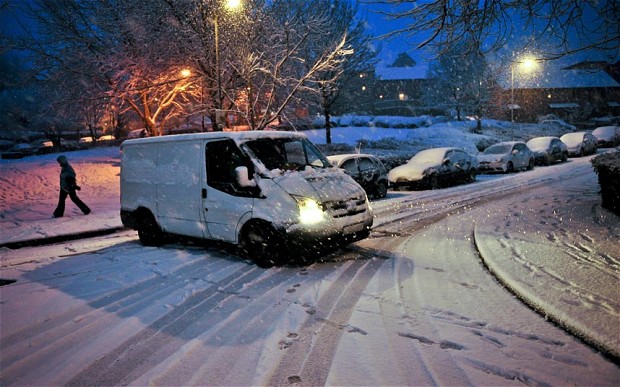 Bitterly cold conditions across much of the UK sees winter cling on once more.

Engineers have been hampered by snow-drifts up to 6 metres high in some parts as they try to restore power to thousands of UK homes hit by the severe weather.

Up to 10,000 properties in Scotland, 7,000 in Northern Ireland and more than 200 in west Cumbria are without power.Some 6,000 north Wales homes have been reconnected over the weekend. An ice warning is in place for much of the UK.

Meanwhile, a 25-year-old whose body was found in snow on Saturday in Lancashire has been named as Gary Windle.His body was found in deep snow in farmland near Burnley.
Police believe he had tried to walk home after a taxi had abandoned an attempt to drive him to Brierfield in severe weather on Friday night.

On Saturday, dozens of people had to be rescued on the A595, near Bootle in Cumbria, where people were forced to abandon their cars, with 37 given shelter at local hotels.
On Sunday, Cumbria Police appealed for any motorists who had abandoned their cars on the road to contact them by dialling 101.They asked people not to return for their car until requested, “as there may be a significant delay and weather conditions are still challenging”.

A spokeswoman added that some areas of the county were still being subjected to severe winds of up to 45mph, causing snow to drift on to the roads even as they were being cleared.”This means that many of the roads are still blocked,” she said, adding that in places drifts were up to 7 metres high.

The cold weather comes as the UK prepares to switch its clocks on to Daylight Saving next Sunday.

Forecasters have predicted that it could be the coldest March since 1962, when average temperatures for the month were 2.8C.