Home > News > UK bracing for coldest weather of the se...

UK bracing for coldest weather of the season 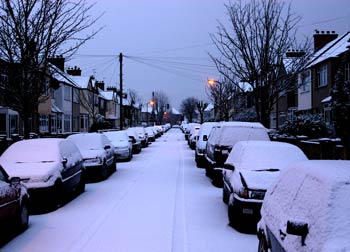 Spring officially starts across the northern hemisphere on the 21st of March but parts of Britain might believe it’s just a rumour.

Bookies have got in on the act and have slashed the odds on a white Easter as the return of freezing temperatures and snow this week will further delay springtime weather for Britain.

Temperatures will remain below freezing in many areas in the next few days, with minimum temperatures as low as -7C and the possibility of snow, ice and frosty conditions potentially being a dangerous combination on the roads.

There are suggestions in the long run that slightly milder conditions could move across the Uk in a fortnight. Before then, however, there will be a cold snap which one described as possibly the chilliest weather of the winter season.

It could even be the coldest weather of the winter in a few places and a reminder how cold a British winter can be.
It appears to be a noticeable cold spell and the overnight temperatures will be quite severe with penetrating frosts, particularly on Tuesday and Wednesday nights right across the country.

Norfolk will feel the brunt of the slushy snowfall with wind and icy temperatures making it feel more like the middle of January than March.

Homepage image of a wintry London