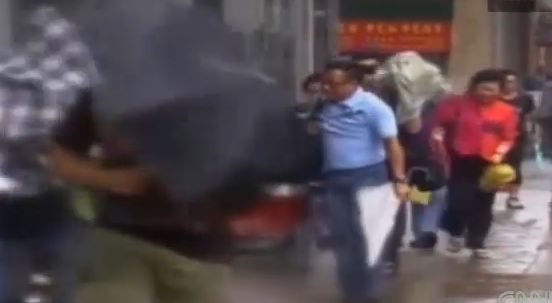 Hong Kong is cleaning up Tuesday after a severe typhoon struck the city with gale-force winds and rain, shuttering much of the city and injuring at least 129 people.

Typhoon Vicente caused the city to raise its strongest typhoon warning for the first time in 13 years.  No fatalities have been reported from the storm, which canceled flights, closed schools and delayed the Tuesday opening of the Hong Kong Stock Exchange.

Government agencies received over 1000 reports of felled trees as well as flood damage. The city has so far opened 24 temporary shelters where 268 people have sought refuge, according to the Home Affairs Department.

The last time the city raised a No. 10 warning signal — the highest for the city — was in 1999 when Typhoon York blew into Hong Kong, according to observatory records.

The tropical cyclone warning signal has since been downgraded to No. 3, which allowed the resumption of full public transportation services, but high rainstorm and landslide warnings remain in effect.

An observatory bulletin issued at 10:45 a.m. local time placed the center of Typhoon Vicente 260 kilometers west of Hong Kong, with winds blowing at average speeds of 63 kilometers per hour or more from the southeast. The typhoon is forecast to move at 22 kilometers per hour into western Guangdong province and cross over to Guangxi province.

The pre-opening and morning sessions of the Hong Kong Stock exchange were canceled, as per the exchange’s guidelines. The stock exchange will open for trading at 1 p.m. Tuesday local time.

Typhoon Vicente roared into Hong Kong on Monday, steadily intensifying throughout the day. The Hong Kong Observatory issued a tropical cyclone warning No. 8 signal on Monday 5:44 p.m. local time, eventually raising it to a No. 10 signal at 12:45 a.m. Tuesday.

The Hong Kong Hospital Authority reported 129 people, aged between 4 and 86 years old, sought medical treatment as of 9:30 a.m., and 72 people were admitted for their injuries. During the storm, at least 60 flights at the Hong Kong International Airport were canceled and 60 flights delayed.

Click here to view CNN video of the typhoon