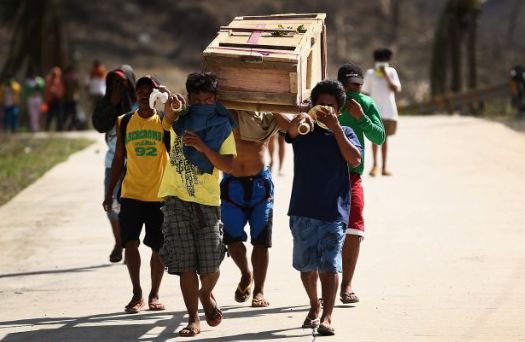 More than a week after Typhoon Haiyan laid waste to much of the central Philippines, the toll is overwhelming: entire communities flattened, thousands dead and nearly 2 million people displaced.

The arrival in recent days of hundreds of aid workers and military troops has seen a flood gate of humanitarian aid — food, water and medical supplies — open, albeit sporadically, in the hard hit provinces.

Crews continued Saturday to collect bodies from streets, with the death toll raised to 3,633, according to the national disaster agency’s official death count.

The number of injured stood at 12,487, the National Disaster Risk Reduction and Management Council reported. At least 1,179 were missing.

For some who survived the monster storm, the aid came too late.

Pulga initially suffered an “open fracture of his shin bones,” according to doctors working at a damaged clinic.

He then contracted a “terrible infection” that left him in need of a blood transfusion.

But with the clinic out of blood and antibiotics, he eventually died, the doctors said.

The death toll could still climb higher, with an additional 1,000 cadaver bags sent to provinces, the disaster council announced as search-and-rescue operations continued in Tacloban City.

The national disaster council’s executive director, Eduardo Del Rosario, said the bags would be placed on stand-by, given that most of the bodies had already been buried in mass graves or claimed by relatives.

Used cadaver bags are cleaned before being reused, he said.

The nation’s disaster agency said more than 9 million people were affected in 44 provinces, 536 municipalities and 55 cities. Nearly 2 million were displaced, with about 400,000 of them finding shelter inside evacuation centers.

In Tacloban City, sickness, hunger and thirst have settled in with the sticky, humid heat and the stench of rancid flesh hanging over the apocalyptic scene.

Survivors in improvised shelters have kept watch over the bodies of their dead relatives.

Latest reports are that 4,460 deaths have been confirmed according to the UN.

Even though we were told to be prepared for 10,000 it’s hard watching this number grow – was hoping they were wrong.  Thanks for the update on the latest reports.