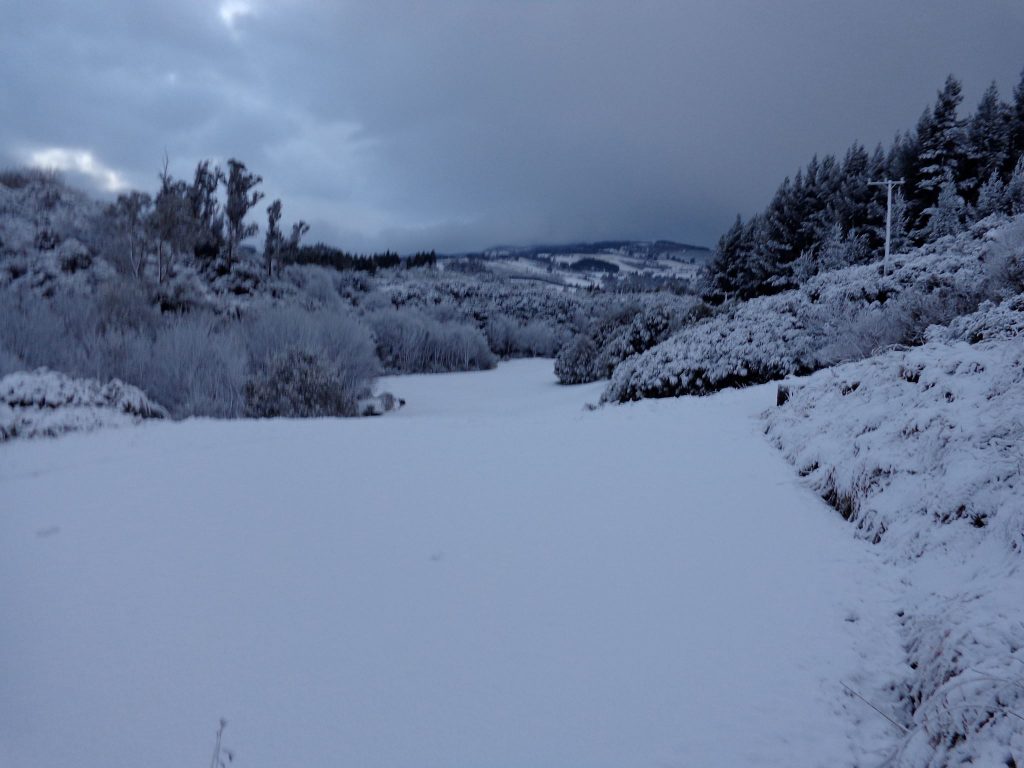 This afternoon sees more of what we saw earlier today but in places the winds have increased, hail has turned up even more than before and buckets of snow are falling across some areas.

The brief but robust southerly has electricity demand very high, motorists being cautious on roads and snowmen popping up.

For the rest of the day it’s a case of wild, wintry weather for two thirds of the country and temperatures 5-10 degrees below normal in many regions.

A tornado of some description had struck Port Waikato which saw roofing iron being tossed about earlier today.

Reports have come in that Alexandra is having one of the heaviest falls in years and Kingston, Otago has now exceeded 30cm.

Christchurch has seen the odd snow shower move in from Banks Peninsula and down the Port Hills. it’s likely these will increase for a time.
“It’s taking its time to move in but the signs are there” says weather analyst Richard Green.”This afternoon and evening sees snow falling a little more for the city possibly and icy winds will make it very unpleasant”.

Wellington has had a bit of a ride today with wind and wet conditions but tonight the snow levels should be at their lowest as the southerly keeps roaring in.

Auckland should see conditions ease by this evening but wintry showers and thunder have peppered parts of the city.Winds have also been very blustery in places.

Dunedin has seen snow showers come and go and should starting easing later this afternoon but temperatures are remaining extremely cold in the wind.

This time tomorrow much of the country should have seen a considerable easing and hopefully thawing but eastern parts of the North Island will be the last place to see showers clear.

Big frosts are possible across much of New Zealand tomorrow night.

After A Few Sleety Showers In Parklands It Seems To Be Stopping, Is The Push From The South Meant To Effect Us At All?

Some snow showers expected this evening with sleety hail showers too 🙂

We have been getting squally hail showers here in Stokes Valley for the last hour or so. Still no sign of the white stuff on the hills here, but plenty of snow visible on the higher hills around Upper Hutt.

After a mostly fine, dry but very cold day in Christchurch City the threatening clouds from the Port Hills and Banks Peninsula have now enveloped the city in sleety snow.

We just had some snow falling in Stratford !!!

Hi there. showers turning more sleety as the day goes on in masterton. im dreading tonight maybe a few full snow flurries if this carries on.

It is balmy 5degrees in Hamilton at 1pm. Feels like it too.