Tuesday’s weather headlines (x3): Some instability, Cool in the east on Wednesday, High from Thursday 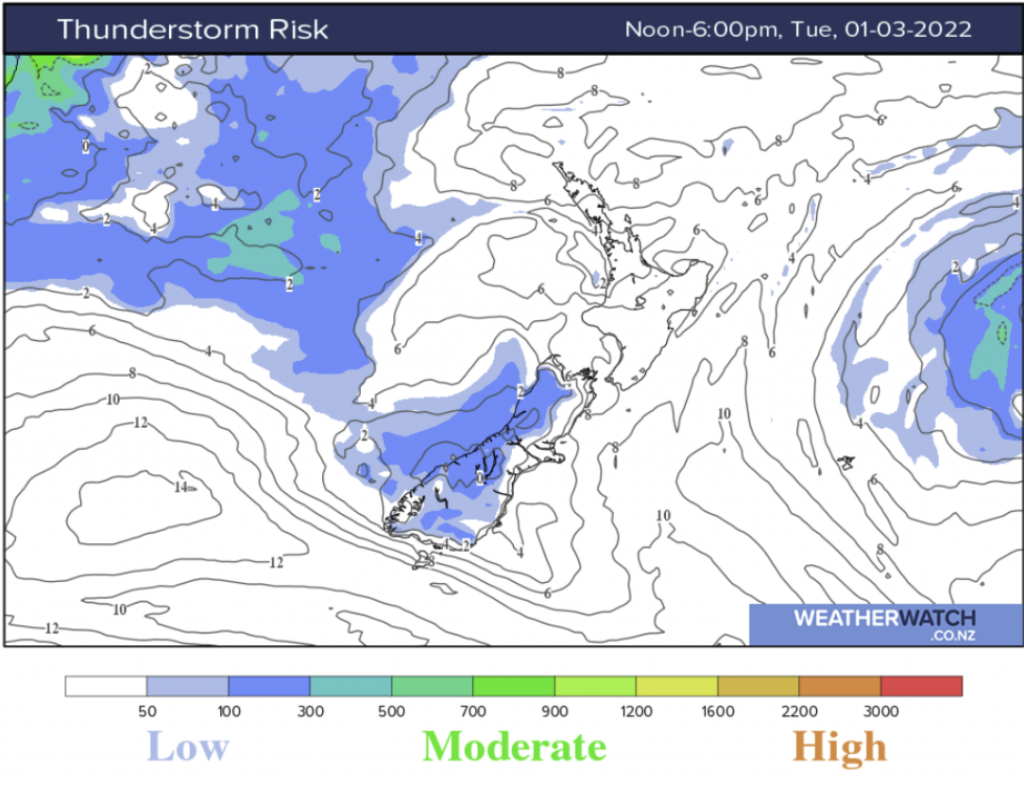 Some cold air aloft leads to a few isolated showers about the Main Divide of the South Island this afternoon, one or two showers may be heavy, perhaps even a rumble of thunder. Showers clear away this evening. You can see in this chart below some CAPE between 100-300 and a Lifted Index around 0. CAPE stands for Convective available potential energy, basically the higher the number the more instability. The lifted index is another measure of instability, 0 or below is what you want, the lower that number (i.e. -1, -2, -3) the more unstable and taller clouds can grow.

Sometimes you can have CAPE showing on a map but positive Lifted Index figures, this can mean there is instability but perhaps not high enough in the atmosphere for a thunderstorm to occur. If we have CAPE in combination with LI’s below zero then there is a higher chance of convection being deep enough for thunderstorms to occur.

A BIT COOL IN THE EAST ON WEDNESDAY

Cloud / showers and southerly winds keep temperatures down in the east on Wednesday, temperatures will likely be in the mid to late teens for most although the eastern North Island may see a high in the early twenties. Western regions on the other hand are certainly warmer with highs in the early to mid twenties, the warmest temperature will likely be about the Waikato getting to 26 but inland Buller is not far behind on 25.

As an anticyclone settles in over the country from Thursday through to this weekend the weather is looking to be mainly settled during this period, we do have the odd shower at times brushing northeastern parts (East Cape through to eastern Northland) otherwise it is mainly dry. The morning’s will be a bit cool especially inland while day time temperatures should progressively get warmer as the weekend counts down.

The below graph is for Christchurch, as you can see from Thursday morning it is a bit cool but as the days move along the overnight lows gets a little warmer and the day time highs gradually get warmer too.

The below graph is for Palmerston North, the temperatures follow a similar pattern here to, overall lows and highs are higher then Christchurch though.

For more on your specific location, please visit ruralweather.co.nz