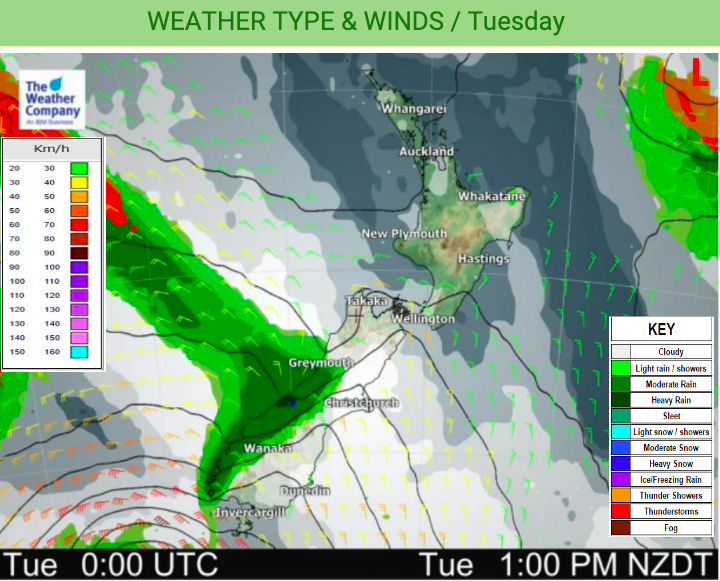 Rain and showers will be moving up the South Island today bringing a variety of conditions.

High pressure dominates most of the North Island, especially the upper half.

But that windy North to Nor’West flow will continue to blow through Wellington and other exposed parts of the lower South Island – and will increase.

Winds will build over 100km/h in some places today due to a low in the Southern Ocean. This makes for a squash zone over NZ on Tuesday, amplifying that nor’west flow with the high pressure belt over the top of the country helping ‘squeeze’ up those winds further down country.

You can track your local barometric pressure HOURLY for the next 10 days by visiting www.RuralWeather.co.nz.

Gales will develop in exposed areas with some hilly/mountainous parts of the South Island potentially getting localised damaging gusts over 100km/h.

This wind flow means every part of NZ will again be warmer than average today – however a cooler change moves into the southern part of the South Island tonight and into Wednesday.

Rain with heavy falls moves up the West Coast.

Here are the regional forecasts for Tuesday – As always, please refer to your super LOCAL and HOURLY weather data to make more sense of what the below means for where you are today…

Northland, Auckland, Waikato & Bay Of Plenty
Quite sunny and warm with westerlies or variable winds.
Highs: 21 – 25

Western North Island (including Central North Island)
A mix of sun and cloud with north to north west winds.
Highs: 18 – 22

Canterbury
Northerly quarter winds and fairly cloudy – sunniest and warmest in the north.
Highs: 19 to 26

West Coast
Cloudy with rain spreading northwards across the day. Drier the further north you go. Some heavy rain in South Westland by day, heading into more populated places at night.
Highs: 18 – 21

Southland & Otago
Northerly quarter winds, leaning more westerly in places. Cloudy in many areas but sunny weather more likely towards Gore. Showers or some spill over rain in the west and even more so around Queenstown. Highs: 16-24