Tuesday’s national forecast – Wet in the west, drier out east 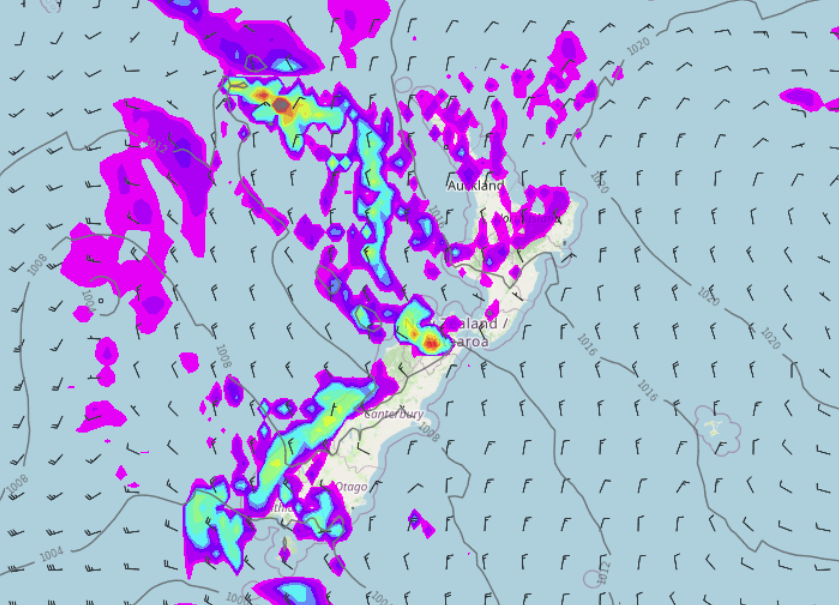 A north to northwesterly airflow lies over New Zealand today bringing showers or some rain in the west, drier warmer weather is expected in the east. Later this evening or overnight a cold front moves onto the far south bringing rain.

Northland, Auckland, Waikato & Bay Of Plenty
Mostly cloudy, a few showers develop for Northland in the morning then spreading elsewhere in the afternoon or evening. Rain may appear overnight about western coastal areas. North to northwesterly winds.
Highs: 22-25

Western North Island (including Central North Island)
Mostly cloudy although sun breaks through a times south of Taranaki through to about Palmerston North. Taranaki and Kapiti have the odd light shower, spreading elsewhere by evening then at night Taranaki sees some rain, possibly heavy with thunder. North to northwesterly winds.
Highs: 20-24

Wellington
Cloudy with a few light spits or showers in the north then elsewhere from afternoon, becoming a little more persistent in the evening. Brisk to strong northerly winds.
Highs: 20-21

Marlborough & Nelson
Mostly cloudy, spits or showers develop about Nelson in the morning then spreading into Marlborough in the afternoon. North to northwesterly winds increase.
Highs: 21-23

Canterbury
A mix of sun and high cloud, north to northwesterly winds and warm temperatures. Some rain or showers may spread into the Mackenzie Country from the west, drying up for a time in the afternoon then moving back in again overnight. Overnight also expect showers for South Canterbury with a southerly change.
Highs: 22-24

West Coast
Cloudy with showers, some rain at times, rain becomes heavy about Fiordland in the evening then South Westland overnight. North to northwesterly winds.
Highs: 18-21

Southland & Otago
Mostly cloudy, some sun at times. A few spits develop in the afternoon for Southland then expect rain at night. Otago has a mix of sun and cloud, lower level cloud about the coast in the morning. Showers develop about the lakes district in the evening spreading from the west then overnight widespread rain moves in. Northwesterlies change southwest overnight.
Highs: 21-24