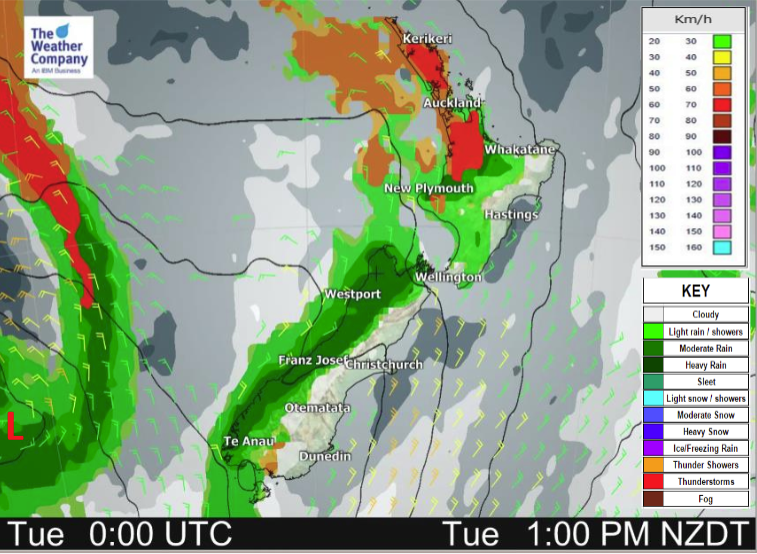 A northeasterly airflow gradually tends to the northwest today as a front passes over the country moving in a west to east fashion.

Rain or showers for western regions today, mainly dry in the east but showers spread into Wairarapa and the lower South Island for a time.

Northerly quarter winds for most today, tending northeast this morning then shifting to the northwest this afternoon.

Northland, Auckland, Waikato & Bay Of Plenty
A mix of sun and cloud, a few isolated showers especially afternoon. There may be an isolated heavy fall about inland Northland and inland Waikato / Bay Of Plenty with a risk of thunder. Northerly winds.
Highs: 22-25

Marlborough & Nelson
Some rain, spits spread into eastern Marlborough at times from the west. Rain starts to thin out from afternoon and some sun may break through. Breezy northerlies gradually tend to the northwest.
Highs: 21-23

Canterbury
Mostly sunny with some high cloud, northeasterly winds. Winds tend more northerly inland, spreading to the coast in the afternoon. A few spits in the high country spreading from the Main Divide.
Highs: 24-28

Southland & Otago
Partly cloudy, showers develop in the afternoon for Southland and southern parts of Otago, some may become heavy then clearing at night. Northerlies, tending northeast about coastal Otago.
Highs: 22-26