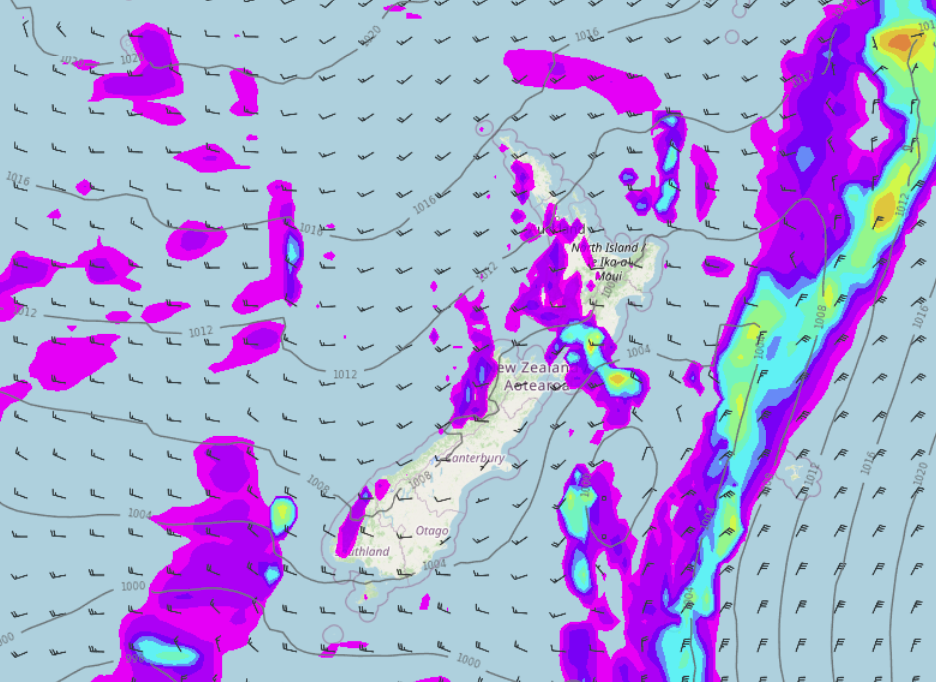 Conditions are a bit unsettled today with a southwesterly airflow lying over New Zealand, from afternoon wet weather will start to ease for the South Island then from this evening / overnight for the North Island.

Most regions see rain or showers today but starting to dry up from this morning for the lower South Island, this afternoon about the upper South Island, overnight for the North Island. A ridge of high pressure moves in overnight, a frosty start for some South Island areas (especially inland) by dawn on Wednesday.

Western North Island (including Central North Island)
Morning showers, possibly heavy about Taranaki then easing into the afternoon as northwesterlies change westerly. Some sun may start to break through also. By evening it should be mainly dry but there may still be a shower or two about.
Highs: 8-14

Eastern North Island
Thick high cloud in the morning, there may be a few spits of rain then becoming mostly sunny in the afternoon as northwesterlies tend to the west. Wairarapa may see a coastal shower in the afternoon with winds changing southwest for a time there.
Highs: 14-17

Wellington
Cloudy areas, a few showers possible, mainly around midday as northwesterlies change southerly for a time. Sunny areas then develop from afternoon with winds tending back to the north by evening.
Highs: 13-14

Canterbury
Rain, clearing around midday, southwesterlies die this afternoon with sun starting to break through.
Highs: 11-14

West Coast
Showers, sun may briefly break through at times. Southwesterlies die out later in the day.
Highs: 9-12

Southland & Otago
Cloudy areas with a shower or two for Southland, mainly in the afternoon. Otago has any early showers clear then mostly sunny. West to northwesterly winds.
Highs: 10-13