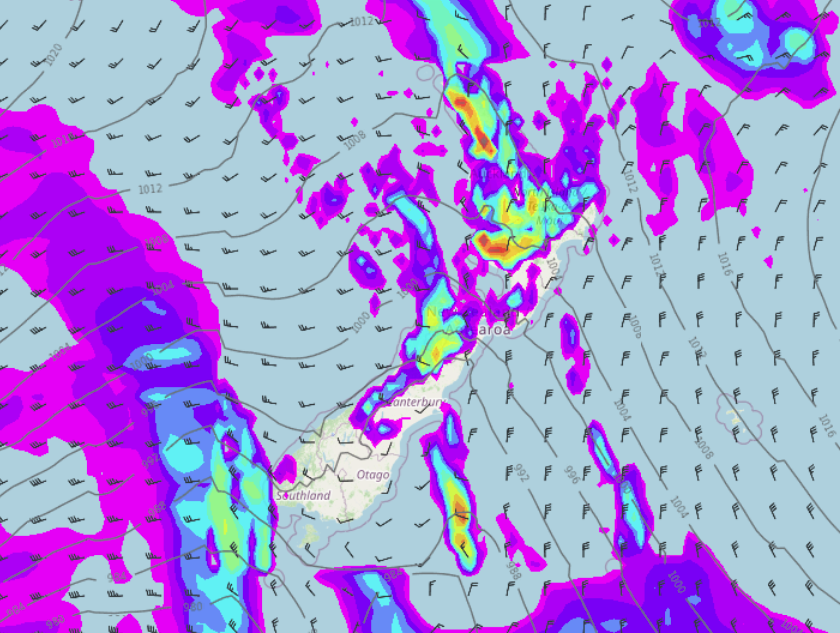 Conditions are starting to become unsettled for New Zealand as a series of cold fronts line up the country moving in from the southwest. Western regions really experience the brunt of the rain or showers today, overnight snow may lower to 300m about the far south.

Northland, Auckland, Waikato & Bay Of Plenty
Cloudy, showers in a few spots especially Bay Of Plenty, showers then becoming more widespread in the afternoon before turning to rain with a chance of thunderstorms. Rain eases back to showers in the evening as northerlies change westerly.
Highs: 16-17

Western North Island (including Central North Island)
High cloud, cloud thicker and lower for Taranaki and Kapiti with showers turning to rain in the morning. Rain becomes widespread in the afternoon, heavy about Taranaki with possible thunderstorms as a front moves through then easing to a few showers in the evening as breezy northwesterlies change westerly.
Highs: 13-17

Eastern North Island
Plenty of high cloud, chance spot of rain otherwise mainly dry. In the afternoon widespread rain spreads into Wairarapa from the west then Hawkes Bay and Gisborne may see some scattered rain in the evening as a front moves through. Breezy northerlies change northwest at night.
Highs: 17-19

Wellington
The odd spit turns to rain around midday then easing or possibly clearing in the evening. Strong to gale northerly winds.
Highs: 13-15

Marlborough & Nelson
Morning rain with heavy falls, especially Nelson and the Sounds. Conditions clear up in the afternoon for Marlborough but Nelson could see heavy showers with a chance of hail for a time in the afternoon before clearing by evening. Strong northerlies tend northwest around midday. Overnight sees another burst of rain move through for Nelson and the Sounds.
Highs: 16-17

Canterbury
Any early high cloud and spots of rain clear then mostly sunny, further inland about the high country rain passes over from the west now and then. Blustery north to northwesterly winds develop around midday, strong for North Canterbury. Overnight winds change southwest bringing showers, perhaps becoming heavy around dawn on Wednesday with hail, maybe even a thunderstorm (although any thunderstorms would be more likely about the coast and Banks Peninsula).
Highs: 14-17

Southland & Otago
Mostly cloudy, a few early spots of rain then clearing. Early afternoon rain moves into Southland then Otago late afternoon as southwesterlies push through. Conditions may ease for a time in the evening then later in the evening or overnight showers picking up again with hail and possible coastal thunderstorms as very cold southwesterlies strengthen especially near the coast. Snow flurries overnight lower to 300m.
Highs: 10-14