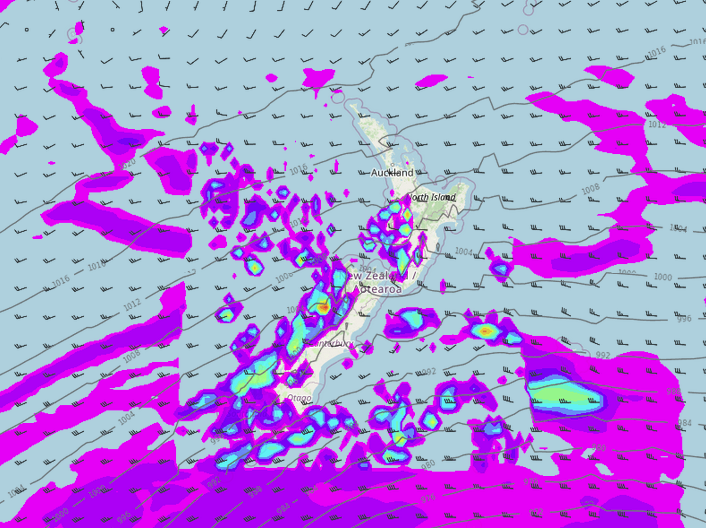 A strong west to southwesterly airflow lies over New Zealand today, showers or rain can be expected in the east and far south, drier weather with some sun in the east. Some snow possible to 300m in the far south today.

Northland, Auckland, Waikato & Bay Of Plenty
Occasional showers, more so in the west, eastern areas like Bay Of Plenty have a mainly dry day with sunny spells. Gusty westerlies.
Highs: 15-17

Marlborough & Nelson
A mix of sun and cloud, a shower or two may pass over into Nelson for a time in the afternoon. Gusty westerly winds.
Highs: 10-15

Canterbury
Mostly sunny, some afternoon cloud possible (mainly near the coast) as gusty westerlies tend a little more southwest. Close to the Main Divide up in the high country showers pass over from the west with snow flurries above 800m.
Highs: 7-15

West Coast
Showers, snow lowers to 300m for southern Fiordland in the afternoon, snow above about 800m north of Greymouth. Strong west to southwesterly winds.
Highs: 6-13

Southland & Otago
Showers and small hail, snow lowers to about 300m in the afternoon for Southland, getting down to 400m for Otago. Brisk to strong westerly winds, gales about the coast.
Highs: 7-10