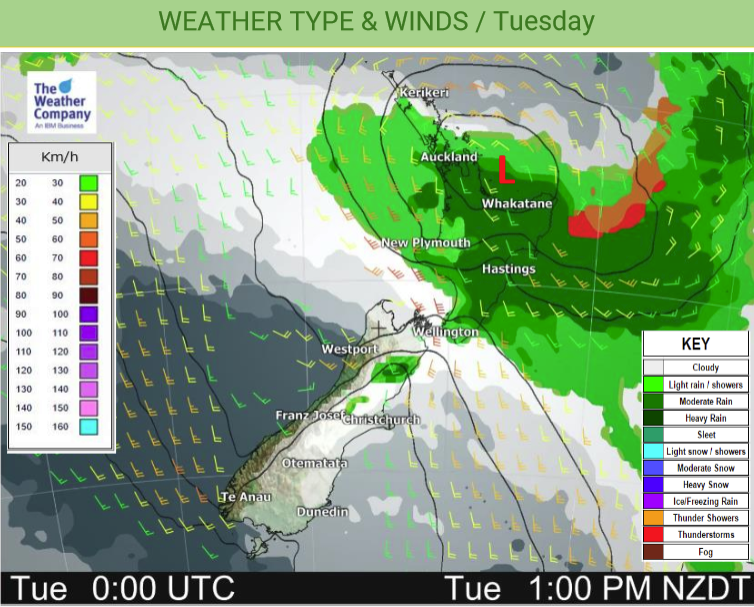 A low pressure system brings rain (especially in the east) and blustery southeasterlies to the North Island today, Southerlies for the South Island.

Some wet weather for most North Island regions today, especially in the east / northeast. Showers for the eastern South Island ease.

Eastern regions see temperatures in the mid to late teens, early to mid twenties in the west.

Blustery southeasterlies for the North Island today, winds are strong to gale for some coastal parts especially through Cook Strait / coastal Taranaki and some eastern coastal fringe areas about Wairarapa to Gisborne.

Northland, Auckland, Waikato & Bay Of Plenty
Patchy rain, clearing overnight for Northland and Auckland. Rain may be heavy for Waikato, a higher chance of heavy rain for BOP. Variable winds, perhaps northeast then changing to the southeast by midday and becoming gusty. Winds may not tend southeast about Northland till evening.
Highs: 20-24

Western North Island (including Central North Island)
Morning rain, drying out in the afternoon but there may be some rain hang about the eastern ranges / eastern CNI the rest of the day. Skies mostly cloudy but afternoon sunny spells possible in the west. Southeasterly winds, strong to gale force about southern coastlines.
Highs: 15-22

Wellington
Showers clear around midday although one or two stragglers could hang around till evening, cloud breaks to a few sunny areas from afternoon. Strong southeasterlies, gale force through Cook Strait.
High: 17-19

Canterbury
Morning showers then cloud starts to break from afternoon, showers may hang about inland parts and the Kaikoura area till evening then clearing. Southerlies die out later in the day.
Highs: 15-17

West Coast
Sunny with southeasterlies, perhaps a little breezy at times then easing in the evening.
Highs: 21-23

Southland & Otago
Morning cloud (may be a more shower about coastal Otago) then increasing sunny spells, southeasterly winds tend to the east in the afternoon.
Highs: 14-18