Tuesday’s national forecast – Strong low has it all 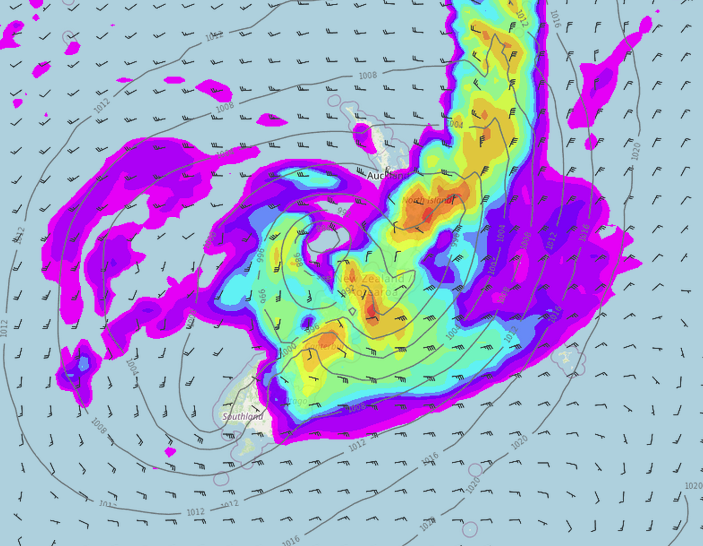 A large strong low moves over New Zealand, especially in the second half of today. Gale force winds, very heavy rain and heavy snow about the South Island high country can be expected.

Northland, Auckland, Waikato & Bay Of Plenty
Rain, heavy falls about Northland spread elsewhere during the morning, easing to showers by midday as strong to gale northeasterlies change northwest. During the afternoon another burst of heavy showers moves in south of Auckland, mainly about the Waikato and there could be some isolated thunder.
Highs: 17-19

Eastern North Island
Rain, possibly heavy for Wairarapa. Rain becomes heavy in the ranges for Hawkes Bay and Gisborne in the afternoon pushing in from the west. Late afternoon northeasterly winds (strong to gale about the coast) change northwest then rain clears. Another burst of rain moves into Wairarapa around midnight with a strong southwest change.
Highs: 16-19

Wellington
Rain with heavy falls in the morning, easing around midday to showers as strong easterlies change to the north. Winds change gusty westerly later in the evening with another burst of rain moving through.
Highs: 14-16

Marlborough & Nelson
Heavy rain, torrential falls possible, easing in the afternoon to showers as strong southeasterlies ease. Heavy snow stays above about 800 or 900m then eases as rain eases.
Highs: 10-14