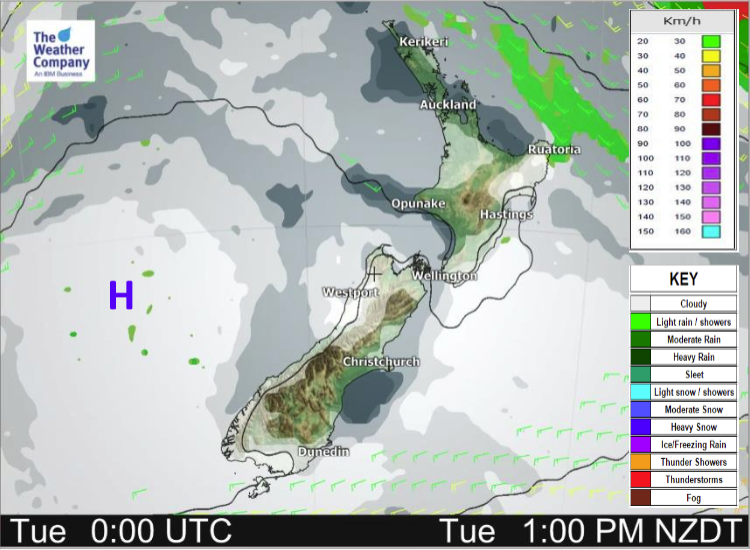 New Zealand is mainly settled today thanks to a large anticyclone covering the country.

Most regions are dry but there could be an isolated shower or two about, perhaps some drizzle also, mainly about the far south then up into Canterbury this evening / overnight.

Temperatures are in the late teens or early twenties for most, a bit cool for Southland though. Winds are mostly light to moderate.

Northland, Auckland, Waikato & Bay Of Plenty
Mostly sunny…. however, some cloud from Coromandel through to eastern Northland may see a shower or two in the morning. Northland has the chance of a few slightly more widespread showers in the afternoon / evening. Light winds.
Highs: 22-24

Western North Island (including Central North Island)
Mostly sunny, there may be a few clouds at times. Light winds.
Highs: 18-22

Eastern North Island
Morning cloud, risk of a drizzle patch then sunny spells break through in the afternoon. Light winds tend to the east after midday.
Highs: 19-22

Wellington
Morning cloud then sunny. Light winds tend to the south in the afternoon.
Highs: 19-22

Canterbury
Sunny, some cloud starts to thicken up Banks Peninsula southwards in the evening then further north overnight. Some drizzle gradually moves in later on too. Easterlies tend southwest at night.
Highs: 19-26

West Coast
There may be a few areas of morning sun, cloud then thickens from afternoon. Light winds tend west to southwest in the afternoon. Buller fairs a bit better with sunnier weather but expect some cloud morning and night.
Highs: 18-23