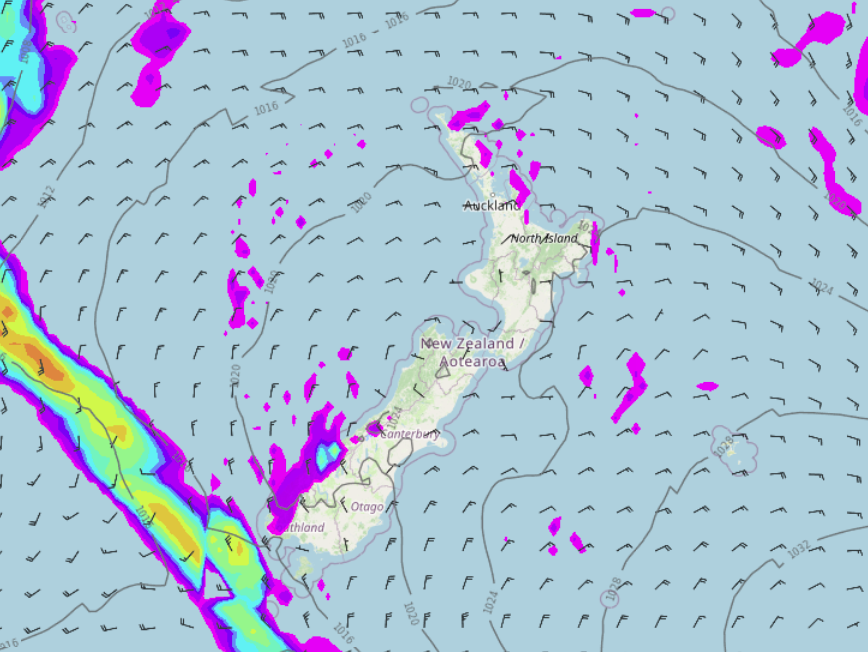 A ridge of high pressure lies over New Zealand today, cloud in the east gradually breaks away. Expect a few showers in the northeast (East Cape through to eastern Northland) and for South Westland.

Northland, Auckland, Waikato & Bay Of Plenty
A mix of sun and cloud, a shower or two in the east from western Bay Of Plenty up through to eastern Northland. East to northeasterly winds.
Highs: 24-27

Eastern North Island
Morning cloud, chance of an early shower then sunny spells increase from afternoon. A shower or two may hang about north of Gisborne through till evening. Afternoon east to northeasterly winds.
Highs: 23-26

Marlborough & Nelson
Cloud breaks away in the afternoon then becoming mostly sunny, afternoon northeasterlies for Marlborough, northerlies for Nelson.
Highs: 22-25

West Coast
A mix of sun and cloud. Skies are sunnier further north into Buller and cloudier for South Westland with showers or drizzle. Northerly quarter winds.
Highs: 20-25

Southland & Otago
A mix of sun and cloud with northerly quarter winds, northeasterlies for coastal Otago. Overnight or perhaps more towards dawn on Wednesday showers develop about Southland with southerlies.
Highs: 23-26