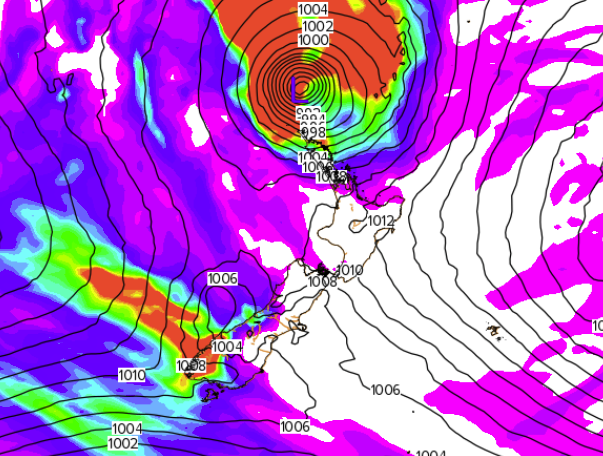 Ex Tropical Cyclone Fili makes its presence felt today gradually bringing in heavy rain and strong winds to northeastern parts of the North Island (Northland through to Gisborne / Hawkes Bay). Areas exposed to the east experience the most unsettled weather with East Cape and Gisborne overnight looking like seeing the heaviest falls. The South Island has a cold front push northwards during the day.

Northland, Auckland, Waikato & Bay Of Plenty
Cloudy with showers from Bay Of Plenty in the east up through to Northland. Rain develops about Northland around midday with heavy falls in the east, spreading into Auckland and Bay Of Plenty by evening, heavier rain will be in the east. East to southeasterly winds strengthen with gales possible in the east, mainly later. Winds change south to southwest later in the day or overnight.
Highs: 18-22

Western North Island (including Central North Island)
Sun and thickening high cloud, the odd shower about Taranaki and Kapiti, becoming a little more widespread in the evening. North to northeasterly winds change south to southeast later in the day and freshen.
Highs: 17-22

Marlborough & Nelson
Some sun and thickening high cloud with northerlies, mid level cloud about the Sounds brings one or two showers during the day. Late evening winds change to the south bringing showers, southerlies strengthening overnight for Marlborough.
Highs: 19-23

Canterbury
Sun and some high cloud, southerlies freshen about South Canterbury in the morning with rain moving in then further north in the afternoon bringing thickening cloud and eventually showers into North Canterbury. Showers clearing overnight.
Highs: 15-21

West Coast
Some rain, heavy about South Westland. Rain starting to clear from the south afternoon on wards as northerlies change to the south, clearing further north this evening.
Highs: 15-20

Southland & Otago
Rain clears around midday for Southland then sunny areas increase with southwesterly winds tending to the west. A shower or two may move back into coastal parts overnight as winds tend southwest again. Otago has rain develop in the morning with southwesterlies, easing afternoon and clearing evening.
Highs: 14-15