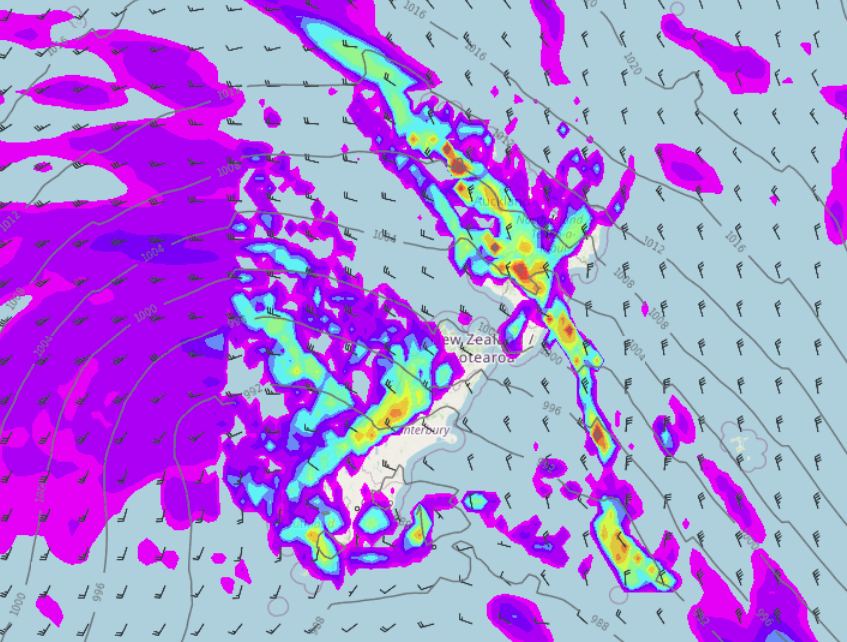 A cold front pushes over the North Island today, this may bring some heavy rain to western regions. The South Island has an unstable westerly quarter airflow with heavy showers and a chance of thunderstorms / hail in the west. A bit drier in the east but showers develop about the far south then push into Canterbury later this evening or overnight.

Northland, Auckland, Waikato & Bay Of Plenty
Sunny areas and increasing cloud, rain in the afternoon with a chance of heavy falls then easing to showers in the evening as gusty northwesterlies change westerly. Showers may become a little beefy overnight in the west as westerlies freshen.
Highs: 15-17

Western North Island (including Central North Island)
Rain, becoming heavy mid to late morning then easing to showers in the evening. Overnight showers may become heavy with a risk of thunderstorms and hail, more so near the coast. Strong northwesterlies ease back a touch by midday.
Highs: 10-15

Marlborough & Nelson
Rain, drying out in the afternoon for Marlborough with sun breaking through. Showers continue about Nelson after midday then spreading back into Marlborough overnight. Strong northwesterlies easing a touch from afternoon although still gusty at times.
Highs: 12-14

Canterbury
Some morning scattered rain, more so inland but a few spits may reach the coast then afternoon sunny areas break through. Northwesterly winds, a bit gusty about North Canterbury. Late evening or overnight southwesterlies move in bringing a few showers.
Highs: 11-15

West Coast
Showers, heavy at times with thunderstorms and hail. Breezy northwesterly winds. Showers start to clear about Fiordland in the evening.
Highs: 8-12

Southland & Otago
Morning showers clear, dry for a time then showers move back in in the afternoon, possibly heavy with a risk of small hail then easing in the evening. Snow flurries lower to 600m in the afternoon.
Highs: 9-12