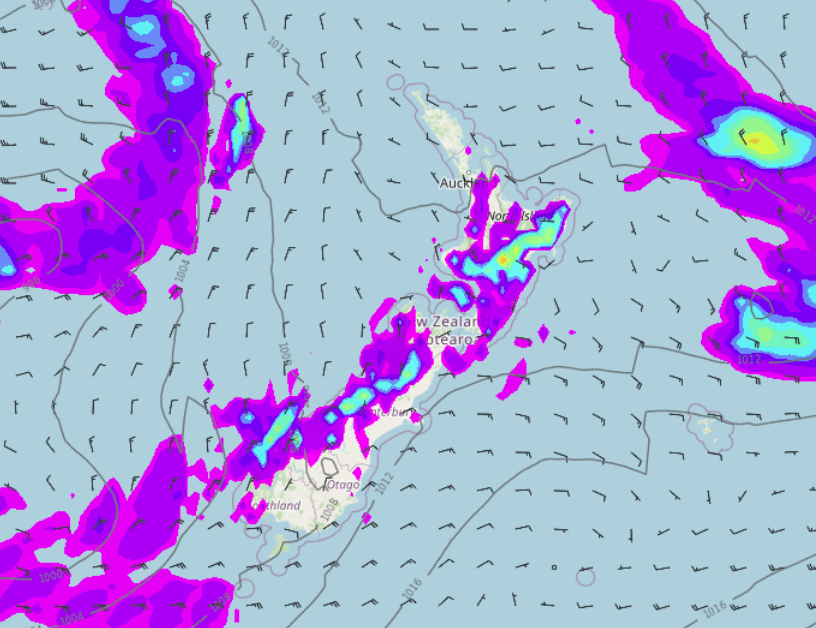 A broad weak area of low pressure lies over New Zealand today, rain or showers for western regions then this afternoon unstable showers develop for the North Island, some may be heavy. Mainly dry in the east but there may be some morning drizzle.

Northland, Auckland, Waikato & Bay Of Plenty
A mix of sun and cloud, morning fog possible for inland areas. Isolated showers develop around midday south of about Auckland, some may be heavy then clearing late afternoon. Light winds.
Highs: 19-21

Eastern North Island
Morning cloud, perhaps some early drizzle then sunny spells. Isolated showers develop in the afternoon inland about the ranges, showers may become heavy with thunderstorms then clearing later in the evening. Light east to northeasterly winds.
Highs: 18-20

Wellington
Mostly cloudy then sunny spells start to break through from afternoon, chance of an isolated shower in the afternoon further inland. Light winds tend to the northeast after midday.
Highs: 17-20

Marlborough & Nelson
Mostly cloudy then some sun starts to break through after midday, an isolated shower or two may develop in the afternoon mainly inland about the ranges, clearing evening. Light winds tend north to northeast.
Highs: 17-19

Canterbury
A bit of a cloudy day, some sun may break through in the afternoon for inland areas. Drizzle at times near the coast especially morning then again at night. East to northeasterly winds.
Highs: 15-19

Southland & Otago
A mix of sun and cloud, a few isolated showers late afternoon / evening for some inland areas and perhaps Southland. Coastal Otago has morning cloud and some drizzle then afternoon sun breaks through. East to northeasterly winds ease in the afternoon however remaining breezy for coastal Otago.
Highs: 15-21