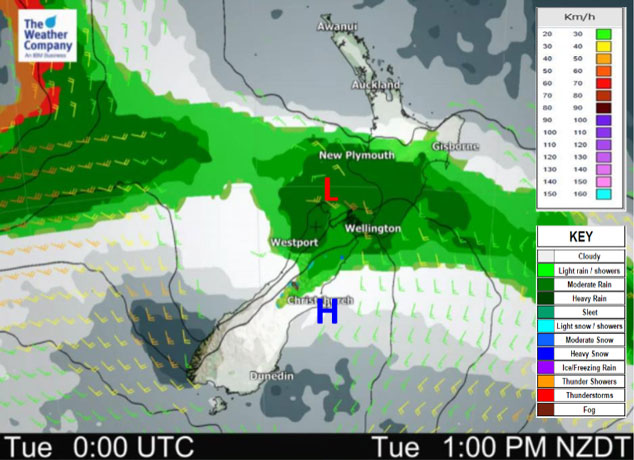 A ridge of high pressure sneaks in behind a cold front slowing down over central parts of the country today. High pressure about the upper North Island brings settled weather there.

A mix of sun and cloud for the upper North Island today, a chance of morning fog then breaking away. Low risk of an isolated shower late afternoon / early evening for inland parts of Northland. Winds are mostly light. Mostly cloudy for the lower North Island, rain (possibly heavy in spots) about Wellington pushes into Taranaki across to Hawkes Bay during the afternoon. Showers also reach into Gisborne during the afternoon and perhaps southern Waikato / Bay Of Plenty later in the evening. With rain winds tend southeasterly.

Mostly cloudy for the lower South Island although parts of Southland and Central Otago sees some sun start to break through from afternoon, Fiordland breaks to mostly sunny weather this morning. Showers about North Westland clear in the afternoon however rain hangs about Buller till evening. Showers north of about Banks Peninsula in the east, rain for northern North Canterbury northwards. Rain may be heavy then precipitation clearing away in the evening although a few showers remain about the Marlborough Sounds and Tasman through the night. Winds from the south or southeast.