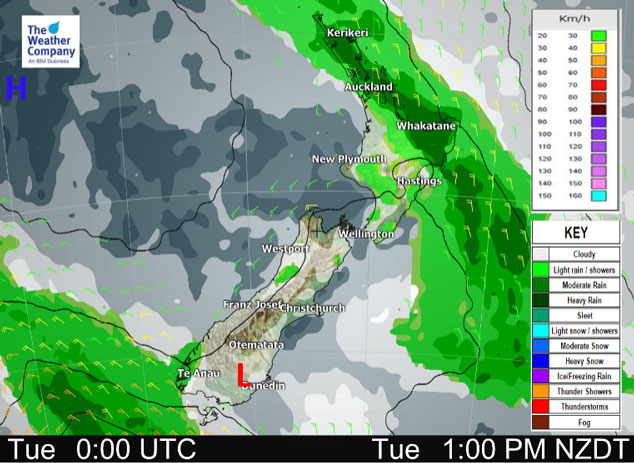 A frontal system passes over the North Island today moving in a west to east fashion, westerlies further south then a cold front pushes onto the lower South Island later this evening / overnight.

Northland, Auckland, Waikato & Bay Of Plenty
Morning rain may be heavy then easing in the afternoon as northerlies change southwest, some sun later in the day before dusk. Rain not clearing Bay Of Plenty till evening.
Highs: 18-20

Western North Island (including Central North Island)
Morning rain, heavy falls possible then clearing in the afternoon with sun breaking through as northerlies change to the west.
Highs: 16-19

Marlborough & Nelson
Morning cloud then sunny spells, risk of an afternoon isolated shower otherwise mainly dry. Light winds pick up from the north or northwest during the afternoon.
Highs: 17-20

West Coast
Partly cloudy, chance of a shower north of about Hokitika then drying out in the afternoon. Rain moves into Fiordland from evening. West to southwesterly winds.
Highs: 14-18

Southland & Otago
Mostly sunny with some developing high cloud, mid level cloud for Otago gradually breaks away in the afternoon. Winds from the northwest for most however tending northeast about coastal Otago. A late evening southwest change brings rain for Southland, overnight into Otago.
Highs: 14-19