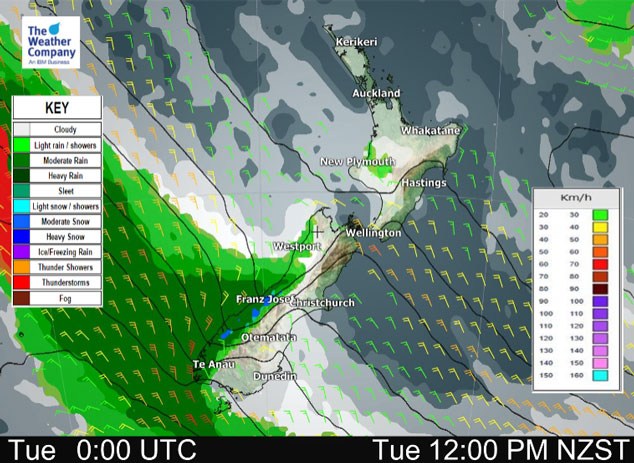 A northwesterly airflow lies over New Zealand today with a cold front approaching the lower South Island from the southwest, this moves onto the lower North Island later today / overnight.

Northland, Auckland, Waikato & Bay Of Plenty
Mostly sunny, there may be some early fog then clearing. Cloud builds in the afternoon bringing the risk of an isolated shower, clearing evening. Light north to northwesterly winds.
Highs: 17-18

Eastern North Island
Sunny and warm, light northwesterlies for most, a bit breezier for Wairarapa.
Highs: 18-21

Marlborough & Nelson
Sunny with some high cloud from afternoon, overnight spots of rain possible. Northerlies for Nelson, northwesterlies become gusty in the afternoon for Marlborough.
Highs: 17-21

Canterbury
Mostly sunny with developing high cloud, rain moves into the high country later in the evening / overnight. North to northwesterly winds pick up in the afternoon.
Highs: 18-22