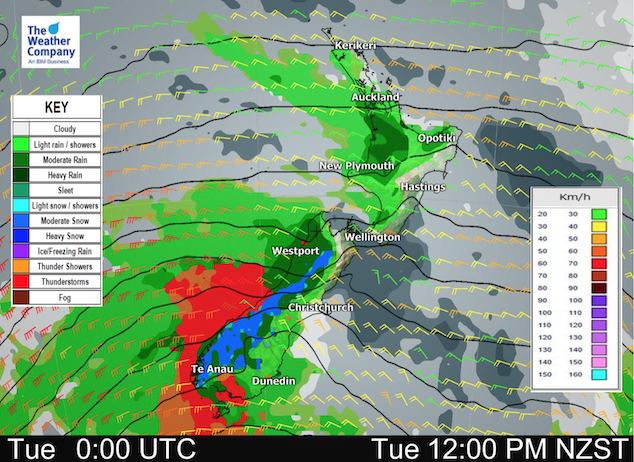 A strong westerly airflow changes to the southwest today over New Zealand with a series of cold fronts pushing northwards during the day.

Northland, Auckland, Waikato & Bay Of Plenty
The odd shower in the west, dry in the morning for Bay Of Plenty with some sun. Showers picking up in the afternoon for all regions then easing evening as breezy northwesterlies change southwest.
Highs: 15-18

Eastern North Island
Mostly sunny with some high cloud, northwesterlies tend westerly mid to late afternoon (gusty about Wairarapa). A few showers may spread into Wairarapa for a time in the afternoon.
Highs: 17-22

Wellington
Early rain then sunny areas, strong northwesterly winds gusting to gale at times. Mid afternoon a period of showers move through as winds tend strong to gale westerly, clearing up in the evening with winds easing.
High: 15

Marlborough & Nelson
Sunny areas and some high cloud, mid afternoon rain spreads into Nelson then late afternoon showers into Marlborough from the west as gusty northwesterlies change strong westerly. Drying up in the evening.
Highs: 15-17

Canterbury
Sunny areas and increasing high cloud with rain about the high country, rain spreading into the foothills during the afternoon and showers may reach the coast. Late afternoon gusty northwesterlies change fresh south to southwest change brings showers, possibly heavy with hail / thunder Banks Peninsula southwards near the coast then clearing in the evening.
Highs: 11-16