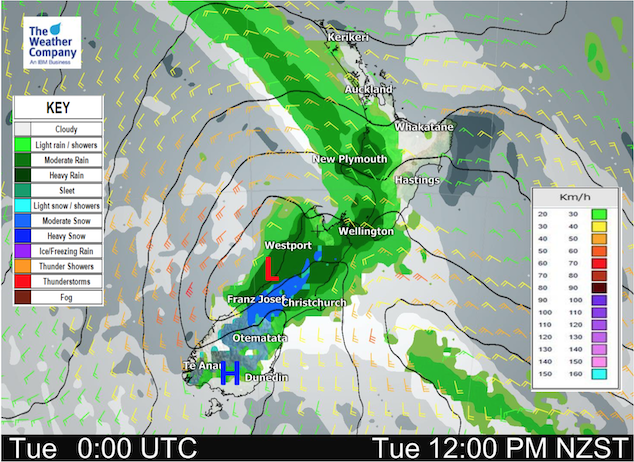 A cold front pushes northwards over New Zealand today, northwesterlies ahead of the front, cold south to southwesterly winds in behind.

Western North Island (including Central North Island)
Mostly cloudy, chance of a spit (mainly near the coast). Afternoon rain moves in as northwesterlies change southwest, winds tend southeast in the evening. Snow overnight to 800m about the Central Plateau.
Highs: 14-17

Eastern North Island
Mostly sunny with some high cloud, showers move into Wairarapa in the afternoon then further north in the evening as northwesterlies change southerly. Snow overnight lowers to 600m about Wairarapa, 800m for Hawkes Bay.
Highs: 19-22

Marlborough & Nelson
A dry morning for coastal Marlborough with some sun then showers develop around midday, clearing at night. Some snow may lower to 500m in the evening before clearing. Elsewhere sees morning rain (heavy about Tasman) easing to showers in the afternoon. Northwesterlies change southerly in the afternoon.
Highs: 15-18

Canterbury
Morning heavy showers push through (rain inland) with hail then easing from afternoon, snow lowers to 200m, even lower in some areas with heavy precipitation. Cold southwesterly winds. First thing in the morning temperatures could be warm for North Canterbury due to northwesterlies before the southwest change moves through.
Highs: 6-16

West Coast
Morning rain eases to showers, some may be heavy with small hail then clearing in the evening as southwesterly winds tend southeast. Becoming mostly sunny in the afternoon about Fiordland.
Highs: 12-13