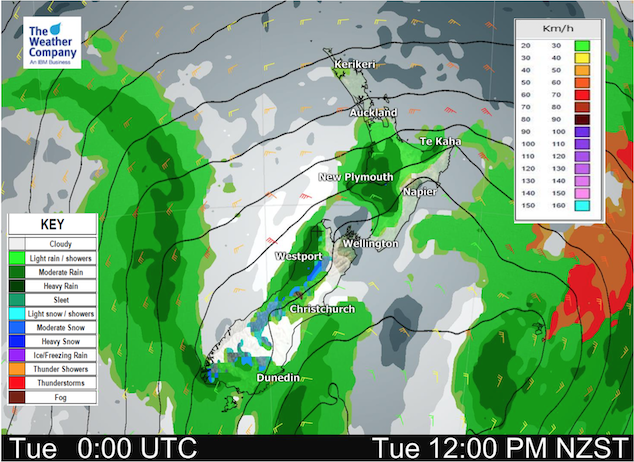 A west to southwesterly airflow lies over New Zealand today, expect showery conditions for most regions especially in the west.

Northland, Auckland, Waikato & Bay Of Plenty
Showers, some may be heavy in the morning about Waikato / Bay Of Plenty. Sun breaks through at times, breezy westerly winds. Overnight further heavy showers this time for Northland / Auckland.
Highs: 14-16

Eastern North Island
Morning cloud may bring a shower or spot of rain then becoming mostly sunny in the afternoon as northwesterlies change westerly.
Highs: 15-17

Marlborough & Nelson
Any early showers clear then expect sunny spells, a few afternoon showers spread in from the west for Nelson. Overnight showers for Marlborough as westerlies change southerly.
Highs: 12-15

Canterbury
Occasional showers with cold southwesterlies developing in the morning. Parts of South Canterbury especially inland may be mainly dry till evening.
Highs: 9-11

Southland & Otago
Morning rain eases to showers, there may be a few dry areas in the afternoon. Some snow on surrounding hill tops overnight. Cold southwesterlies.
Highs: 9-11