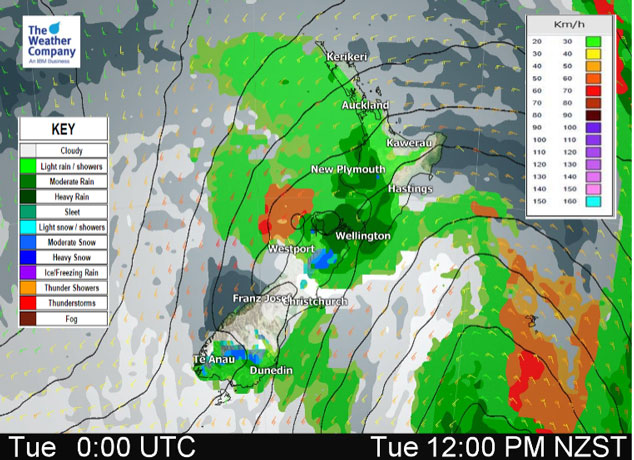 A large high to the west over Australia and a low pressure system to the east dredge up a cold south to southwesterly airflow over New Zealand today bringing unsettled weather.

Northland, Auckland, Waikato & Bay Of Plenty
Showers, heavy for a time in the afternoon with possible hail / thunder as westerlies change fresh southwest. Showers ease for most by evening but the odd heavy shower with hail / thunder may still push through Auckland through the night.
Highs: 13-18

Eastern North Island
Showers about Wairarapa turning to rain in the afternoon, some small hail is possible with rain then easing overnight. Further north expect some morning sun, a few showers push through in the afternoon then clearing. Overnight rain moves into Hawkes Bay / Gisborne with a risk of hail as southwest winds freshen.
Highs: 13-19

Wellington
Areas of rain with cold southerlies, small hail possible at times from afternoon. Rain eases to showers in the evening.
Highs: 10-11

Marlborough & Nelson
Showers, heavy at times with small hail then clearing in the evening. The Nelson / Tasman area may see a few thunderstorms from afternoon then clearing evening, not a high risk but a chance. Southerly winds pick up late afternoon.
Highs: 11-14

West Coast
Becoming mostly sunny in the morning for South Westland, North Westland has showers, some may be heavy with small hail then easing and clearing in the afternoon. Showers may linger about Buller till evening. Cool southerly winds.
Highs: 12-14