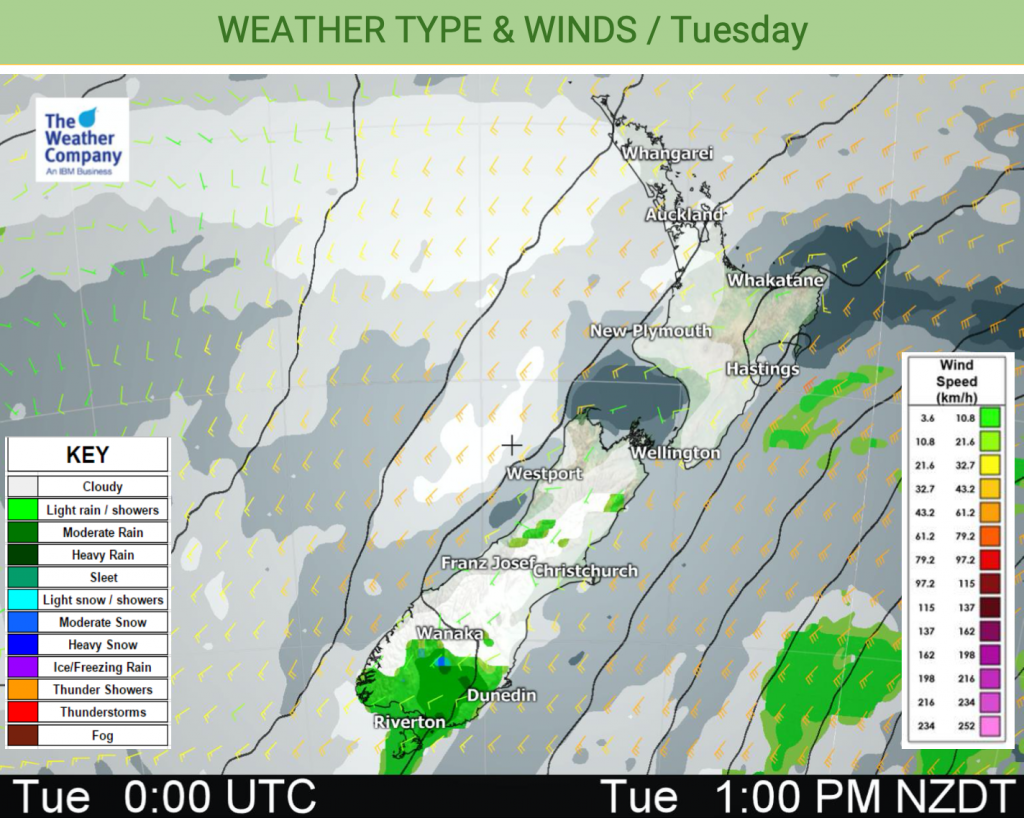 A southwesterly airflow lies over New Zealand today moving around an anticyclone in the Tasman Sea.

Cloudy areas and the odd shower at times for the western North Island today, winds fresh from the southwest then easing later this evening. A mix of sun and cloud for the Bay Of Plenty. Mostly cloudy about Wairarapa with a shower or two, some morning sun further north in the east then cloud thickens up from afternoon with south to southwesterly winds.

Mostly sunny this morning about Nelson and Marlborough, cloud thickens up from afternoon then some drizzle or the risk of a shower developing in the evening. Mostly sunny south of about Greymouth in the west, some high cloud. Some morning cloud further north brings the risk of a shower then clearing. Cloud starts to thicken up about the ranges in the afternoon and there may be an isolated shower or two by evening.

Morning coastal showers about Canterbury then clearing, sun breaks through this afternoon. Inland Canterbury stays mostly cloudy all day and there may be a light shower late afternoon / evening about the ranges. Mostly cloudy about Southland and Otago with showers, easing during the day and dry spells developing this afternoon, winds fresh from the southwest but gradually easing. Conditions mostly dry by evening about the far south but there may be the odd lingering shower about.

Highs in the late teens or early twenties for most of the North Island today, perhaps breaking into the mid twenties about eastern Bay Of Plenty. The coolest spots will be about Auckland, Taranaki, Wellington and Wairarapa. Temperatures in the mid to late teens for most of the South Island, just reaching into the early twenties for inland Buller and Nelson. Invercargill though only manages 13.