Tuesday’s national forecast – 30 degrees possible for some, rain for others (+10 Maps) 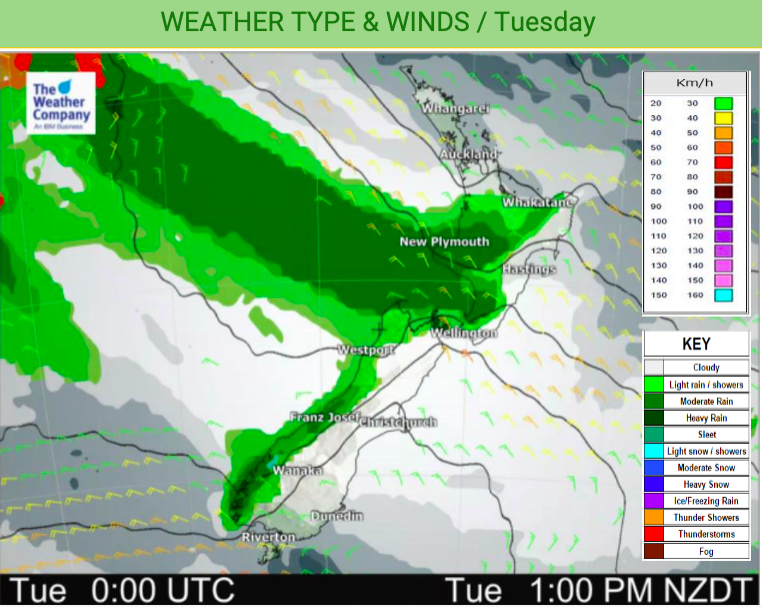 Sub-tropical winds means the very north and eastern parts of the North Island may be in to the low 30s today while elsewhere it’s another mild day with cloud in the west and again some patchy western rain and showers.

Eastern areas look to be hottest and driest in both islands.

North Auckland and Northland are also contenders for some hot weather, with added humidity.

Northland, Auckland, Waikato & Bay Of Plenty
A mix of sun and cloud and warm. Clouds thicker the further south you go. A few showers possible from south of about Hamilton with King Country highest risk of wetter weather. Nor’west winds for most. Hottest in Northland where late 20s, even 30 degrees is possible.
Highs: 20-29

Western North Island (including Central North Island)
Cloudy with areas of rain and showers. There may be some dry times too. Rain looks like it may set in again overnight. Humid north to north west winds.
Highs: 18-21

Eastern North Island
Mostly Sunny but cloudier towards Wairarapa where a few showers are possible and the highs will be more likely in the lower 20s. Hot elsewhere with highs into the early 30s for Hawke’s Bay in particular. A warm night ahead tonight – hope you have air con!
Highs: 22-32

Wellington
North to north west winds and showers. Might be some sunny spells. Rain perhaps more likely overnight and into Wednesday.
High: 18 – 20

Patchy rain or showers with mild nor’westers. Fairly dry inland and to the east.
Highs: 22 – 27

Canterbury
Nor’westers blowing through with varying amounts of cloud thickness. Hot for some areas and pushing towards 30 degrees if the sun is out on the plains, but a little cooler in the mountains with thicker cloud cover.
Highs: 19 – 30

West Coast
Areas of rain and showers with mild northerlies.
Highs: 18 to 20

Southland & Otago
A few showers possible otherwise a mainly dry for most with nor’westers blowing through.
Highs: 14-23