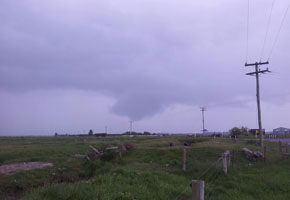 A southwesterly airflow lies over the country tonight with a high in the Tasman Sea and a developing low pressure system south of the country.

Areas of cloud push into Wairarapa this evening with southerlies, chance of
light shower developing. Isolated showers, some heavy with thunderstorms about
Hawkes Bay and Gisborne clearing later this evening. Southerlies then push in
with cloud and the odd shower possible.
Tonight’s Lows: 13-14

Westerlies ease this evening, clear with some cloud. Chance of a shower
towards dawn tomorrow morning for most. About northern Taranaki expect
southwesterly winds for most of the night.
Tonight’s Low: 12

Areas of cloud push in this evening, southerlies with the chance of the odd
shower.
Tonight’s Low: 13

Some cloud with east to northeast breezes.
Tonight’s Lows: 9-10

Areas of cloud break up this evening with southerlies easing later.
Overnight cloud thickens again with the odd shower moving in from the west,
winds tend westerly.
Tonight’s Low: 8

Some cloud with southwesterlies easing later. Overnight cloud thickens with
some rain moving in from the west, winds tend westerly.
Tonight’s Lows: 9-10