Tropics north of NZ firing up 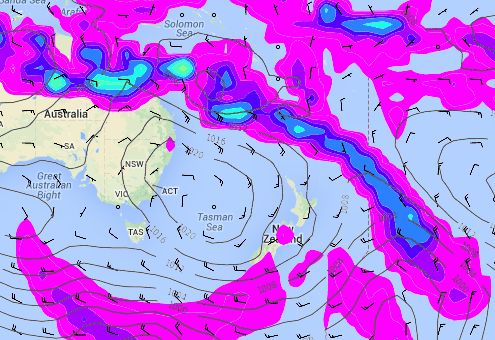 The weather news authority says New Zealand isn’t as well protected this year from tropical lows.  “A tropical storm hitting such a narrow country as ours is always down to a bit of luck, or bad luck, but certainly the lack of strong highs over our nation this summer means we’re a little more vulnerable”.

Cyclone Ian hit small islands around Tonga this past weekend. While the storm wasn’t big in size it was massive in intensity, reaching Category 5 on a scale that only goes up to 5.

Directly north of New Zealand and the tropics aren’t too firey just yet, but some long range maps show more rain makers and potential storms around the Coral Sea in the final 10 days of January. New Zealand may continue to be somewhat protected by Tasman Sea highs, but these highs don’t fully protect northern and eastern areas.

New Zealand isn’t a high risk nation for a tropical storm – in fact technically they lose their official cyclone status before they reach land here as they move well away from the warm tropical sea waters that fuel them.

However we do get swiped by a tropical storm at least once every year or so and most years an offshore storm creates dangerous currents and rips on our beaches.

The cyclone season often peaks around Feb to April.