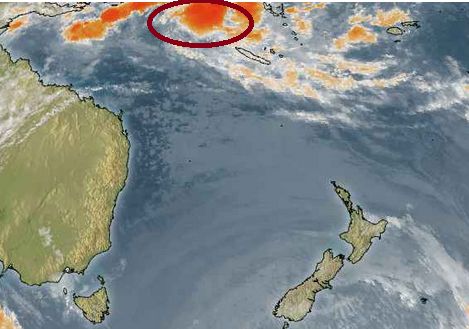 A developing tropical storm near the Solomon Islands will continue to intensify over the coming days, passing by New Caledonia this weekend then heading towards the upper North Island around Monday to Wednesday.

WeatherWatch.co.nz forecasters say the low will be tracking south fairly quickly, which will limit its time over warm tropical waters.  “Tropical lows need a lot of warm ocean water and ideal conditions to grow into a cyclone and with this low expected to drop quickly south towards the Southern Ocean it may not have a chance to fully intensify. In saying that, this low will deepen enough to produce flooding rains, gale force winds and dangerous rips” says head weather analyst Philip Duncan.

Mr Duncan says the low looks certain to head towards New Zealand – but questions still remain about the structure and shape of the low when it arrives – and that is key to knowing exactly where any potential severe weather might be next week, and for how long this low might hang around.

The rapid movement south towards New Zealand may also work in our favour, meaning dry farms in the north might get rain but hopefully spared any major issues.

Australia’s Bureau of Meteorology remains with “moderate” confidence this may become a cyclone today.

Fiji’s MetService also says there is a greater than 50% chance this low could become a cyclone while brushing western New Caledonia over the next 72 hours.

New Zealand’s government forecaster, MetService, says there is a risk for heavy rain around northern New Zealand on Monday and Tuesday but currently says the risk is “low” for it being severe.

“Between this tropical low and another Southern Ocean low we can expect next week to be pretty unsettled” says Mr Duncan from WeatherWatch.co.nz.

There is some good news long range – a high may well move in for much of the country in the final week of January, bringing summer weather to the South Island and lower North Island, however another sub-tropical low may put the squeeze-on around northern areas by Auckland Anniversary.  At this stage that long weekend for northern New Zealand looks mostly dry to start with, but, may end wetter – however it’s too early to lock in just yet.  We’ll update that forecast early next week.

Is this low now TC June?