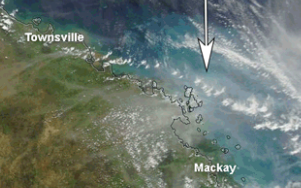 Tropical Cyclone Debbie left a mark that’s visible from space in the ocean waters near the Great Barrier Reef this week before it lashed northeast Australia’s Queensland Province. The fierce winds from Debbie, which peaked at Category 4 strength, also caused turbulent water that may have damaged some of the corals.

In this satellite image comparison of March 17 to March 29 and March 30, you can see the striking difference. In the latter two images, the ocean appears lighter blue due to how much Debbie stirred up the water and sediment.

Satellite image comparison of March 17, March 29 and March 30 off the northeast Australia coast in the vicinity of the Great Barrier Reef. Debbie’s strong winds stirred up the water below making it appear lighter blue after the cyclone. Cloud cover is white.

The pounding surf from Debbie may have also damaged parts of the Great Barrier Reef, where coral bleaching from warm water temperatures has occurred for the second year in a row. Tourism operators in the Whitsunday area are being given special permission by the Great Barrier Reef Marine Park Authority (GBRMPA) to help reorient corals  knocked over by Debbie.

â€œTouching and moving coral is not normally allowed, but given the circumstances, weâ€™ve provided operators with the ability to restore coral colonies,” said Dr. Mark Read in a news release from the GBRMPA.

Corals can be saved if they are repositioned in time depending on their type which can range from days to about a week in some cases.

â€œWhen corals are overturned by extreme weather thereâ€™s a small window for recovery if they can be successfully turned back over,” Read added.

The extent of any damage to the corals caused by Debbie was unknown as of Thursday, the GBRMPA said.

Another way to visualize the impact Debbie had on the ocean is by looking at sea-surface temperatures.

As you can see, a pocket of cooler-than-average water grew off the coast thanks to upwelling caused by Debbie. Upwelling happens when strong winds force surface water away and it’s replaced by deeper and cooler water.

The blue shadings in this animation show the cooler-than-average waters that developed Saturday-Tuesday in the wake of Tropical Cyclone Debbie off the northeast Australia coast.

The cooler waters will not have a major impact on the coral bleaching occurring in the Great Barrier Reef, according to Professor Terry Hughes, director of the Australian Research Council Centre of Excellence for Coral Reef Studies.

â€œCyclone Debbie has come a month too late and in the wrong place to prevent mass bleaching,â€ he told the Guardian.