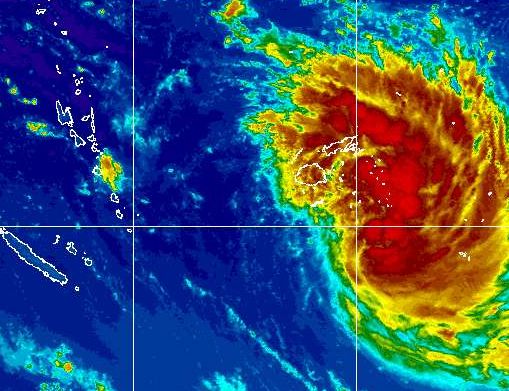 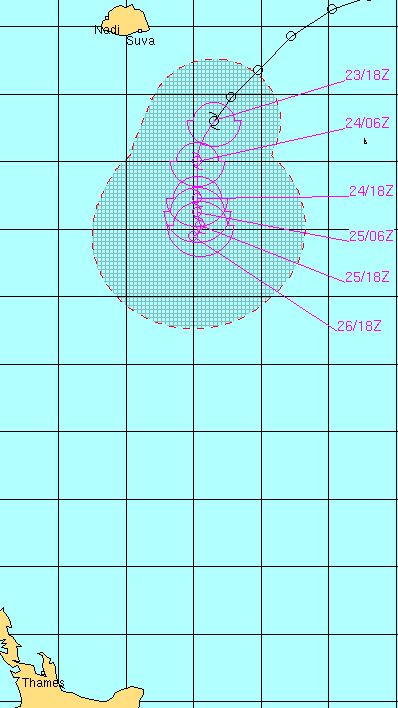 The category 1 cyclone has sustained winds of 65km/h and gusts to 85km/h with winds expected to become sustained at 85km/h by dawn.  It is tracking away from Suva and the main island of Fiji into the open waters between Fiji and New Zealand.

Central air pressure is 990hPa and the storm is strengthening.

Again WeatherWatch.co.nz bucks the trend and predicts the cyclone will reach category 3 status or even 4. This was the case with Wilma, Atu and Zelia, all of which became far more intense than predicted by government forecasters.

Computer models used by WeatherWatch.co.nz show that Bune will track along a similar path to Cyclone Atu, which passed New Zealand’s North Island in the third week of February this year.

However latest computer model runs by ECMWF – the organisation that has accurately picked all south west Pacific cyclones this year – shows Bune tracking closer to Gisborne and East Cape in the North Island.

The centre is expected to track within 200 to 800kms of East Cape.  The big difference is based on extremes by the various models we use.

Should Bune track 200kms east of East Cape it’s possible winds will reach gales force with heavy rain – but being so far offshore it should mean no severe damage.

WeatherWatch.co.nz says it’s still too early to be certain of any exact track or severe weather over New Zealand but people in East Cape and near Gisborne should be aware of dangerous surf and rips next week – which could stretch down to Hawkes Bay.

Swimmers and beach-goers along the North Island’s entire east coast are advised to simply be aware of stronger than usual rips next week says Weatherwatch.co.nz.

Cyclone Bune is expected to drift very slowly south west or south-south west over the coming days, with it strengthening and speeding up as it heads near East Cape early next week.

The latest tracking map by the Fiji Meteorological Service

Think Dougy might be one of those govt forecasters ?! Keep up the great work guys we appreciate the early heads up of potential incoming weather
Richard

“Again WeatherWatch.co.nz bucks the trend and predicts the cyclone will reach category 3 status or even 4.”

WeatherWatch does not have the credentials, experience or knowledge to “buck the trend”. You’re doing little more than “model watching”. Leave forecasting to the experts.

Weather watch is great and certainly much more reliable than any other forecasters I know. So I wonder what forecasting experts you may know that provides a better service than weatherwatch?
Care to enlighten us?
And if you don’t think weatherwatch does not have the credentials…then I wonder what you are doing here on their site in the first place…
As they say…if you don’t have something good to say, don’t say anything.

Yeah, teah and just look at the experts’ credentials and records.
You’re doing a great job guys.
At last an accurate forecaster we can all have faith in. Thanks

Flying in and out of the windy city on Tuesday – am I in for a bit of excitement?

Hi there – nothing to indicate it will be any windier than usual.  Winds should be from the east or north east and aren’t expected to be too strong.  Have a good flight!

Hi…..My daughter is flying tomorrow for twelve days to Yasawa Islands….is it safe to travel>

Hi Beverley – yes it absolutely safe to travel.  The cyclone is actually moving away from Fiji and is on the other side of the main island – well away from Yasawa.  Flights from Aucland to Nadi will go around the storm with maybe a bit of moderate turbulence closer to Fiji – but nothing out of the ordinary we don’t expect.

I’m a proud member of the Minerva Reef Yacht Club (even have the t-shirt) and I imagine it is getting pounded about now!