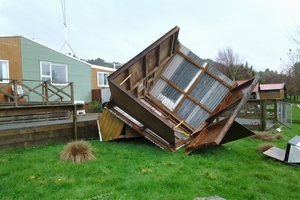 A brief tornado blew through the West Coast township of Rutherglen on Saturday, lifting a shed off the ground and throwing it into a fence.

Rutherglen resident Nelly Hofman said she and her husband were inside when the tornado hit after 10.30am.

“That morning was pretty foul weather … then out of the blue there was a crack.”

Their large wooden shed was picked up and blown 10 metres into a fence in front of their house.

Trees next to their property were uprooted, windows were broken and their garden furniture blown away, with some items thrown about 30m into the air.

“Anything that was not heavily bolted down, disappeared,” Mrs Hofman said. The mini tornado came from the sea and carried on for another 100m before it died away.

“It came and went, it stopped just before it hit the hill behind us.”

She thought they might have been the only people who got hit by the tornado. Their house had been hit by similar events in previous years, she said.