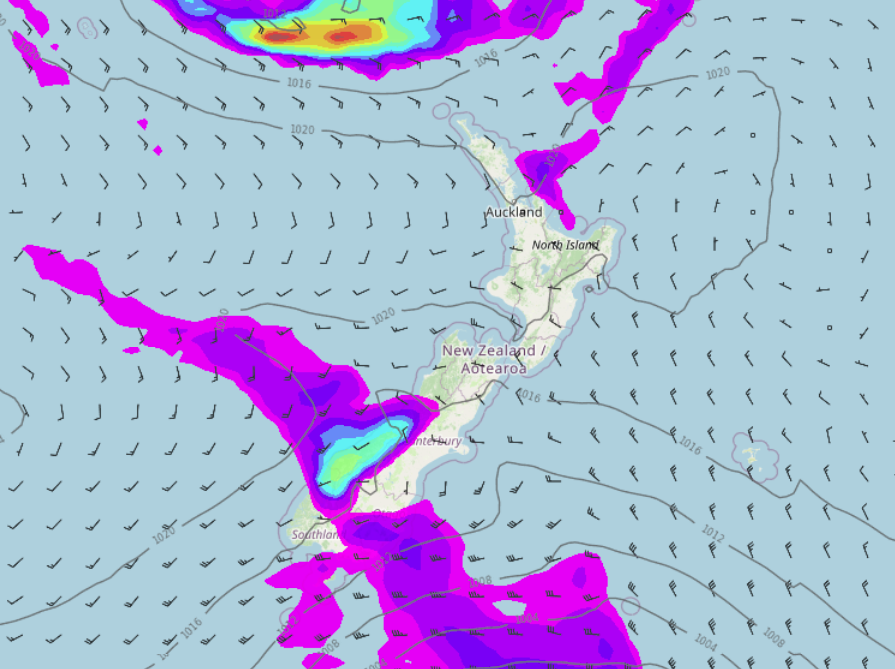 High pressure pushes in from the Tasman Sea today bringing settled weather for most of New Zealand, some places inland would have had a frost this morning also especially the inner South Island (Mackenzie Country). A few showers will continue to pester Fiordland though and showers this morning north of Napier will clear away. Strong southwesterlies about the eastern North Island will start to ease from this morning.

SETTLED ON FRIDAY THEN A FRONT ON SATURDAY

High pressure brings a mainly settled day on Friday then on Saturday a cold front pushes north over the South Island, this brings some rain in the west and showers in the far south. Later in the day or overnight a few light showers may develop for Canterbury mainly about the coast. This front in general does weaken as it moves northwards, in the evening cloud thickens about the lower North Island then pushes up the east coast overnight bringing in a few light showers there.

Mainly settled on Sunday thanks to high pressure but there is quite a bit of cloud in the east, perhaps even a light shower or two. We also see a few showers north of about Coromandel and Auckland with easterly winds there. Western regions overall are mostly sunny and dry.

On Monday we see showers north of about Waikato, perhaps some rain north of Auckland with easterly winds. Showers can also be expected for East Cape and Gisborne. The rest of the North Island is dry. The South Island is dry and mostly sunny, morning cloud in the east breaks away, South Westland may have some mid level cloud.