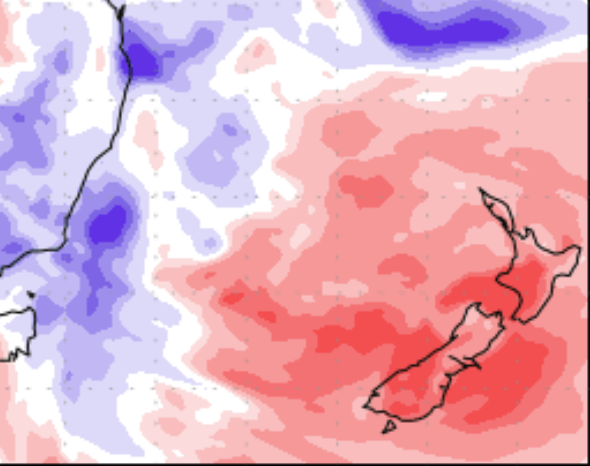 The weather pattern today and tomorrow is fairly static and doesn’t change much, we have high pressure for most of the country with winds moving around the high coming in as a southeasterly for the North Island. Generally eastern regions can expect some cloud but afternoon sunny spells are likely, Hawkes Bay and Gisborne gets the odd shower, so does Northland at times and Buller. Western regions by and large will be sunnier and warmer.

WARMEST IN THE WEST AND SOUTH

As alluded to in the paragraph above, eastern regions today and tomorrow will be cooler overall compared to out west. We have an easterly quarter airflow over the country so naturally eastern parts will feel a bit nippier. Out west and about inland Southland and Central Otago temperatures get into the mid twenties. In the east high’s are more in the late teens or early twenties.

Basically the remainder of summer (all 5 days of it) is fairly settled with high pressure mostly hanging around. It is mainly dry if we step back and look at the broader picture but a weak front pushing northwards over the country this weekend does bring a few showers in the east. An isolated shower or two does appear in the west now and then too, for more details on your location please visit ruralweather.co.nz and search for your town or city.

The below image is a “Precipitation (% of normal)” map for the 10 day period, 23rd February – 3rd March. Red is drier than normal, blue is wetter than normal. As we can see New Zealand is looking mainly dry. Long range models are showing some rain for the North Island in the first or second week of March due to a tropical low, but that is a while away and something we’ll just have to keep an eye on.