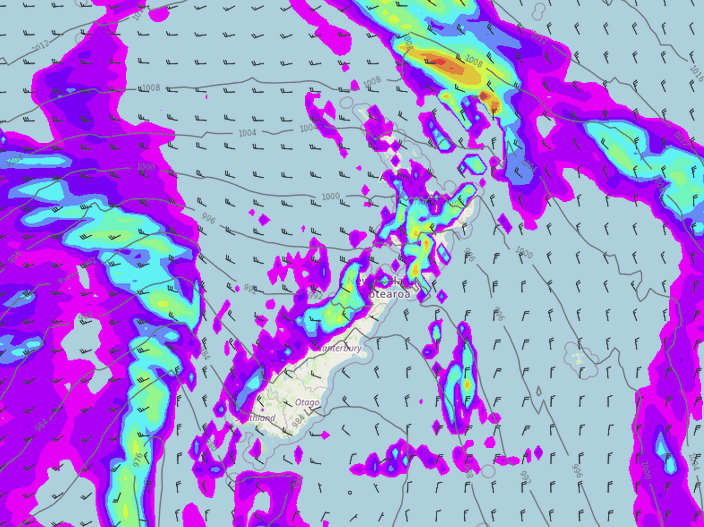 A westerly airflow lies over New Zealand today with various troughs pushing in from the Tasman Sea, therefore we have plenty of wet weather in the west, drier in the east. A vigorous front pushes in from the west overnight.

Western North Island (including Central North Island)
Rain, more persistent for a time in the afternoon with a chance of heavy falls and thunderstorms, easing evening. Gusty north to northwesterly winds.
Highs: 12-17

Eastern North Island
High cloud, some rain spreads from the west into Wairarapa during the afternoon, clearing evening. North to northwesterly winds.
Highs: 16-20

Wellington
Rain, more persistent for a time in the afternoon, easing in the evening. Strong to gale northwesterly winds, strongest after midday.
High: 14-15

Marlborough & Nelson
Rain, more persistent for a time around midday as a front moves through then easing back, clearing evening. Gusty northwesterly winds, strong to gale about the Sounds.
Highs: 12-15

Canterbury
Morning widespread rain in the high country, high cloud elsewhere then breaking to afternoon sun, gusty northerly winds (more so for Nth Canterbury). A brief southwesterly flick up the coast in the afternoon could bring a shower or two. Overnight heavy rain moves back into the high country with some rain spreading eastwards.
Highs: 9-16