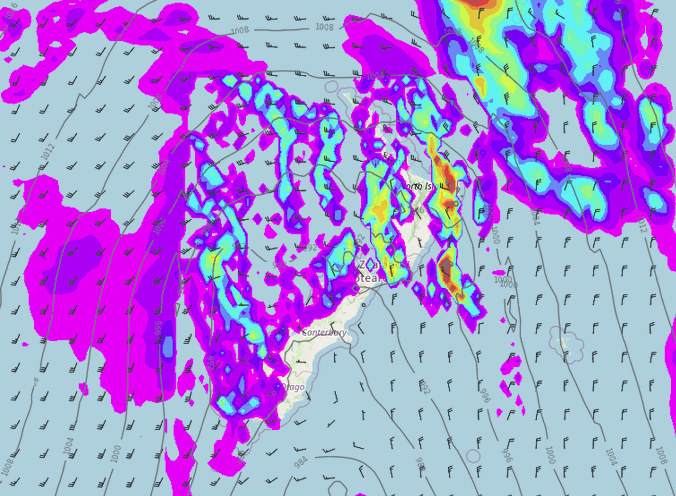 A low pressure system brings unsettled weather today, rain or showers in the west and reaching into the eastern North Island too. Rain develops about the far south around midday as southwesterlies move in, reaching into Canterbury overnight.

Eastern North Island
Some sun, rain for Wairarapa pushing over from the west then spreading elsewhere around midday, clearing later in the evening. Northerly winds.
Highs: 17-20

Wellington
Rain, there could be a thunderstorm and heavy falls at times, especially morning then starting to ease back from afternoon. Strong north to northwesterly winds ease after midday.
Highs: 15-16

Marlborough & Nelson
Occasional showers with sunny spells at times, there could be a morning thunderstorm or two especially about the Sounds. Showers becoming few and far between after midday. Northerlies.
Highs: 14-16

West Coast
Rain in the morning, the odd heavy fall and thunderstorm then easing to showers in the afternoon, northerlies change southwest late afternoon or evening. Showers clear Fiordland in the evening.
Highs: 12-15

Southland & Otago
A mix of sun and cloud, rain develops around midday for Southland as light northerlies change southwest. Rain moves into Otago in the evening.
Highs: 13-16