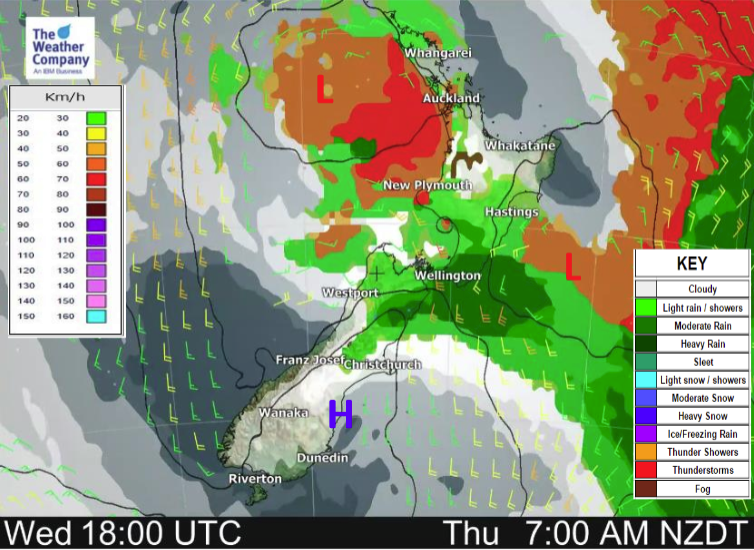 Unsettled for the North Island today thanks to a low pressure system, skies clear or clearing up further south.

Most North Island regions will see rain or showers today, perhaps a few heavy falls and thunderstorms in the mix too. Showers about Canterbury and the upper South Island mostly clearing this morning but one or two could linger till evening.

Winds are light to moderate for most however through Cook Strait and about Taranaki south to southeasterly winds will be strong, south to southwesterly winds up the east coast of the North Island may be blustery also.

Northland, Auckland, Waikato & Bay Of Plenty
Dry at first with some sun, showers develop late morning about Northland and Auckland then becoming heavy in the afternoon with possible thunderstorms. Easing in the evening. Showers with a chance of heavy falls may not get into the Waikato and Bay Of Plenty till late afternoon or evening. Variable winds tend southeast later in the day.
Highs: 20-22

Western North Island (including Central North Island)
Showers, thinning out in the afternoon but a few may remain till evening. Some sun possible before dusk. Southeasterly winds, gusty about coastal Taranaki.
Highs: 15-21

Eastern North Island
Showers about Wairarapa spreading into Hawkes Bay and Gisborne during the morning, chance of an isolated heavy fall. Warm before showers move in. Showers clear late afternoon about Wairarapa and Hawkes Bay around midnight.
Highs: 16-22

Wellington
Early rain eases to showers, clearing in the afternoon then sun starts to break through. Strong southerlies die out later in the day.
Highs: 15-17

Marlborough & Nelson
Morning rain, possibly heavy (more so about Marlborough), clearing by midday then becoming sunny in the afternoon. South to southeasterly winds tend to the east for Marlborough, afternoon northerlies for Nelson.
Highs: 17-21

West Coast
Sunny apart from some clearing morning rain for Buller, southeasterlies ease then tending west to southwest in the afternoon.
Highs: 20-22

Southland & Otago
Any early cloud clears then sunny, some high cloud from afternoon. Light winds, tending to the west after midday for Southland. Afternoon northeasterlies freshen for coastal Otago.
Highs: 17-24