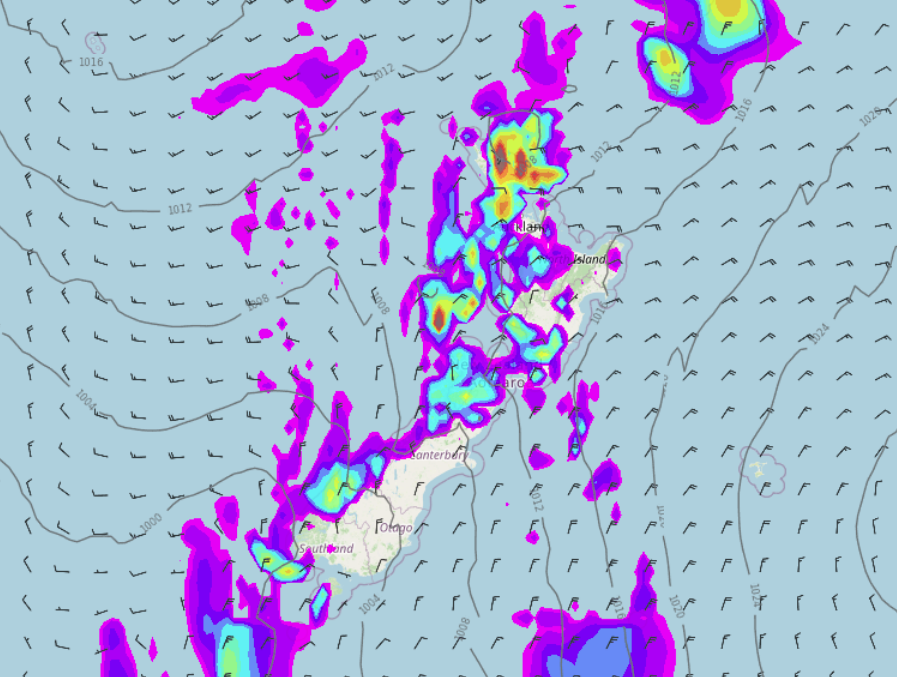 A northerly airflow lies over the South Island today meanwhile a front over the North Island my deliver a few heavy areas of rain especially in the west from Northland / Auckland down through to Taranaki.

Northland, Auckland, Waikato & Bay Of Plenty
Showers turning to areas of rain in the morning, there could be a few heavy falls especially about Northland and Auckland this afternoon, possible thunderstorms for Northland. Conditions ease in the evening for Northland then elsewhere overnight as northeasterlies change southwest.
Highs: 17-19

Western North Island (including Central North Island)
Showers, some rain about Taranaki then spreading elsewhere in the afternoon, easing later in the evening. Rain may become heavy about Taranaki. Northeasterly winds.
Highs: 14-18

Eastern North Island
High cloud, a few spits about Wairarapa turning to rain by evening, Hawkes Bay and Gisborne may see a shower or spit later in the evening. Northeasterly winds.
Highs: 17-19

Marlborough & Nelson
Rain, possibly heavy in the morning for Nelson and about the Sounds then easing to showers in the afternoon. Northerly winds.
Highs: 16-18

West Coast
Mostly cloudy with some rain north of about Haast, further south just a few spits or showers then some rain moving in during the afternoon. Northeasterly winds.
Highs: 15-18

Southland & Otago
A mix of sun and cloud, perhaps some morning fog. Light winds for Southland, north to northeasterly winds for Otago.
Highs: 17-22