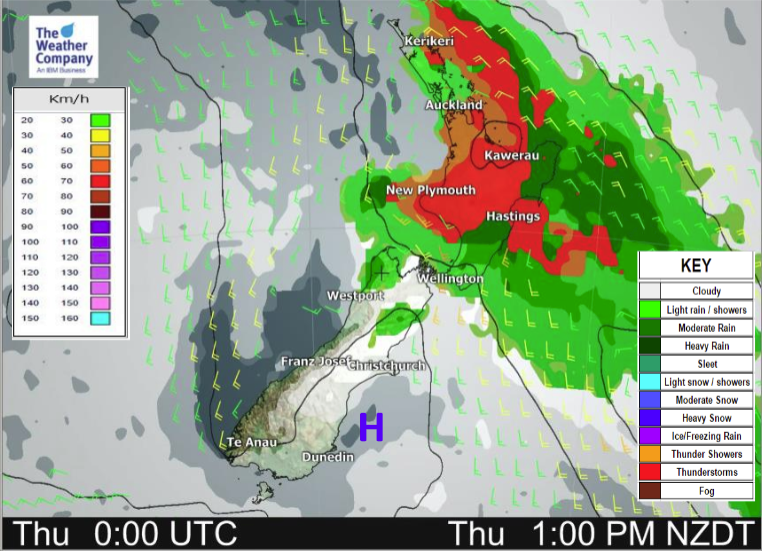 A ridge moves over the South Island today bringing clearing conditions meanwhile it’s still quite unsettled for the North Island.

Wet for most North Island regions today, showers for Canterbury through to Nelson in the east gradually clear away. Isolated showers about Tasman and Buller clear later this evening or overnight.

Temperatures will feel a little cool today but the West Coast, inland parts of the lower South Island and the upper North Island have warm highs this afternoon.

Southeasterly winds ease about the lower North Island this evening however southwesterlies then pick up about the eastern North Island.

Northland, Auckland, Waikato & Bay Of Plenty
Morning rain (possibly heavy with thunder) then easing to showers, clearing during the afternoon with southwesterly winds and sunny spells breaking through. The Waikato and Bay Of Plenty may see heavy afternoon showers and thunderstorms, clearing evening as southwesterlies change southeast.
Highs: 22-25

Western North Island (including Central North Island)
Rain, there may be heavy falls with thunderstorms about northern Tarnakai, easing to showers from afternoon as southeasterly winds increase. Drying out in the evening.
Highs: 16-22

Eastern North Island
Rain, easing to showers in the afternoon then clearing overnight apart from Gisborne. Southwesterlies pick up first thing in the morning.
Highs: 18-21

Wellington
Mostly cloudy, risk of a shower then drying out in the afternoon with sun starting to break through. Breezy southerlies.
Highs: 16-18

Marlborough & Nelson
Showers clear away in the afternoon for Marlborough then some sun breaks through, southeasterly winds tend easterly after midday. Nelson has cloud break to sunny spells in the morning, chance of a shower, more so in the afternoon about the northwest Nelson ranges area then clearing evening. Light southerlies tend to the north in the afternoon.
Highs: 18-20

West Coast
Any early cloud clears then mostly sunny, some cloud builds about Buller in the afternoon bringing the risk of an isolated shower. Light southeasterlies tend southwest in the afternoon.
Highs: 20-23