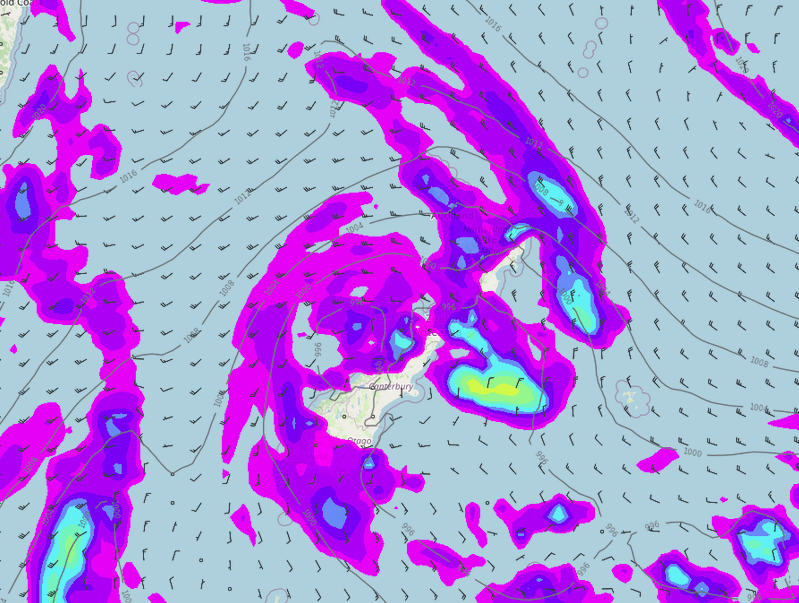 A low continues to lie over New Zealand today, the South Island more specifically. A few fronts moving around the top of this low (over the North Island) bring in some heavy showers with a chance of thunderstorms.

Northland, Auckland, Waikato & Bay Of Plenty
Showers, a burst of rain moves through in the morning (thunderstorms possible) then again in the afternoon as gusty northerlies change westerly.
Highs: 15-17

Western North Island (including Central North Island)
Rain with a chance of heavy falls and thunderstorms, mainly in the morning then another risk in the evening. Northerlies tend northwest by midday.
Highs: 11-16

Eastern North Island
Morning cloud and scattered rain breaks to sun, some rain spreads from the west for much of the day into Wairarapa. Northeasterlies tend northwest around midday.
Highs: 15-18

Wellington
Rain eases to showers in the afternoon, northwesterlies may change to the south later in the day.
Highs: 13-14

Marlborough & Nelson
Rain or showers, easing in the afternoon with only the odd spit remaining. A mostly cloudy day but some sun may break through before evening. West to northwesterly winds.
Highs: 10-14

Canterbury
Cloudy areas, there could be a shower, mainly out on Banks Peninsula later in the day. Light winds tend southwest in the afternoon.
Highs: 4-12