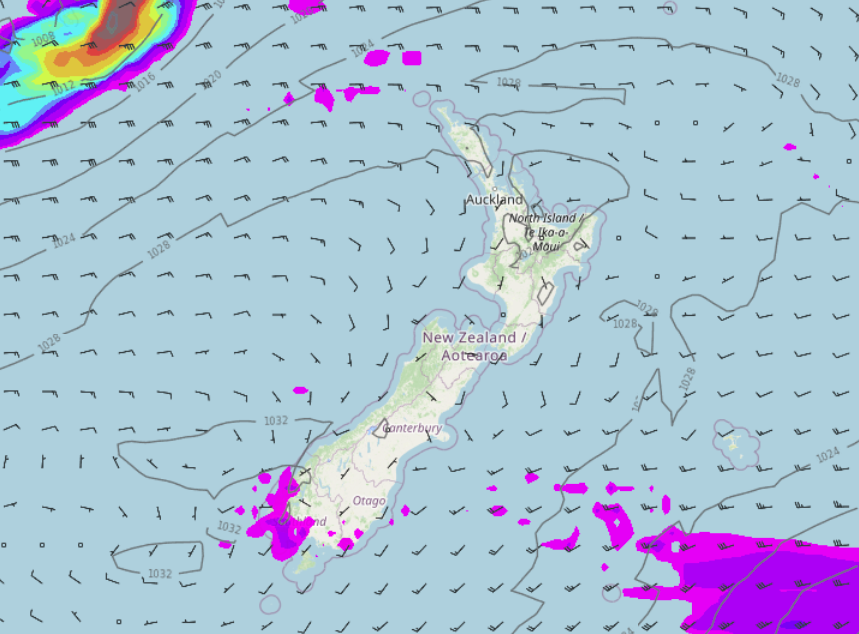 Dry for most regions but we do have a few showers for Southland, perhaps North Canterbury this evening then the eastern North Island overnight. Winds won’t be overly breezy for anyone but southerlies becoming a little fresh through Cook Strait this afternoon.

Northland, Auckland, Waikato & Bay Of Plenty
Mostly sunny, some cloud at times. Light west to southwesterly winds for most but Northland sees winds from the east.
Highs: 20-22

Wellington
Some sun and high cloud, lower level cloud develops in the afternoon as northerlies change to the south.
Highs: 20-21

Marlborough & Nelson
Mostly sunny, a touch of high cloud from afternoon. Lower level cloud thickens in the evening for a time about Marlborough. Light winds tend to the east in the afternoon for Marlborough, afternoon northerlies for Nelson.
Highs: 19-20

Canterbury
There may be some sun first thing then cloud builds during the morning with light southerlies, winds swing around to the northeast in the afternoon. There may be a touch of drizzle or a shower about North Canterbury late afternoon / evening otherwise mainly dry.
Highs: 16-17

West Coast
Mostly sunny after any morning cloud breaks away, there may be some high cloud. Light winds tend to the southerly quarter.
Highs: 16-18

Southland & Otago
The odd shower for Southland, drying out in the afternoon with sunny spells starting to break through. Westerlies tend southwest. Central Otago is mostly sunny, there may be some cloud for a time in the afternoon, light winds. Coastal Otago sees some sun at first then increasing cloud by midday as light winds tend to the south.
Highs: 13-16