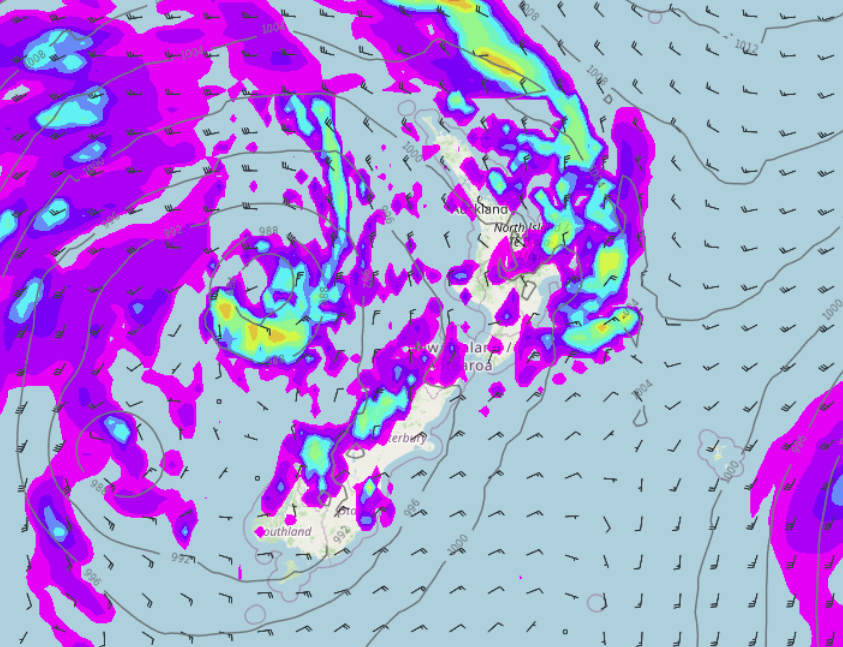 A front passes over New Zealand today moving in from the west, the front is hooked into an area of low pressure in the Tasman Sea.

Rain or showers mainly in the west today but a few scattered falls in the east for a time, mainly the eastern North Island.

Northland, Auckland, Waikato & Bay Of Plenty
Morning rain then easing to afternoon showers and some sun breaking through as northeasterlies change northwest.
Highs: 15-17

Western North Island (including Central North Island)
Mostly cloudy. Morning rain eases to showers in the afternoon as east to northeasterly winds tend more to the north, conditions drying out for inland areas during the afternoon. Overnight showers may pick up for coastal areas with the chance of an isolated heavy fall / thunderstorm.
Highs: 10-14

Eastern North Island
Cloudy with scattered rain developing late morning spreading from the west, clearing in the evening as northeasterly winds tend to the north.
Highs: 12-14

Wellington
Cloudy, scattered rain develops in the morning then clearing in the evening. Northeasterly winds.
Highs: 11-12

Marlborough & Nelson
Mostly cloudy, some rain in the morning then easing to showers and dry spells in the afternoon. Overnight rain moves back in, chance of an isolated heavy fall / thunderstorm about Golden Bay and the outer Marlborough Sounds. Light winds.
Highs: 10-12

Canterbury
Mostly cloudy, a few spits of rain may move through mainly about North Canterbury in the morning. Northeasterly winds.
Highs: 7-10