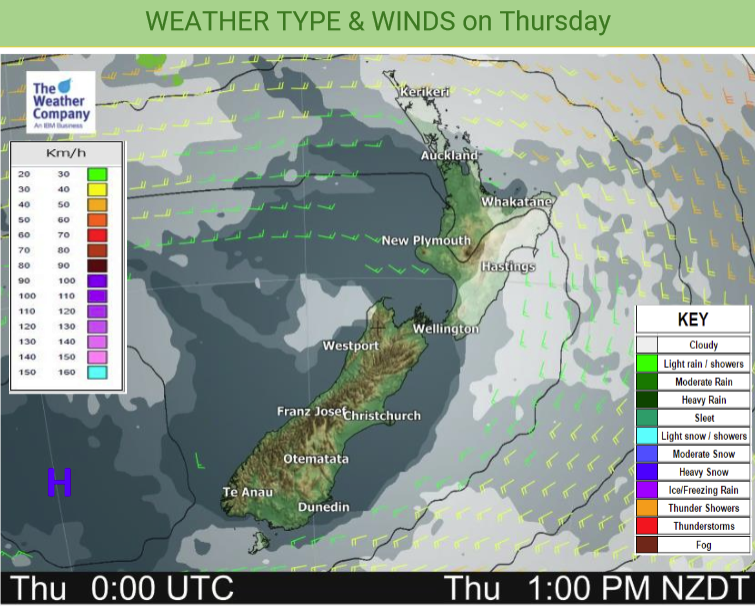 An anticyclone gains more ground over New Zealand today with a southeasterly airflow dying away for the North Island.

Dry for most today apart from a few clearing morning showers about Gisborne / East Cape and eastern Northland.

Temperatures reach into the low to mid twenties for most, perhaps late twenties for some inland areas. Some coastal spots may not escape the high teens.

Winds are light for most, southeasterlies about East Cape and eastern Northland ease.

Northland, Auckland, Waikato & Bay Of Plenty
Mostly sunny, there will be some cloud about eastern Coromandel, Great Barrier Island and eastern Northland however bringing the risk of a shower, mainly morning. Southeasterly winds.
Highs: 22-24

Eastern North Island
Any early cloud clears Wairarapa then sunny, cloud clears Hawkes Bay in the afternoon. Gisborne has a few morning showers, cloud breaks there in the evening. Southerly winds die out later in the day.
Highs: 18-20

Wellington
Sunny, a cool start inland but the warmest in the afternoon. Light southerly winds.
High: 18-22

Canterbury
Sunny, light winds tend to the east in the afternoon. Warmest afternoon temperatures about the Mackenzie Country.
Highs: 21-27

West Coast
Sunny, light winds tend west to northwest (onshore) in the afternoon. There may be some cloud for Buller (especially nearer the coast).
Highs: 20-25

Southland & Otago
Mostly sunny, there may be a touch of high cloud. Light winds tend onshore in the afternoon for coastal areas. A warm afternoon inland.
Highs: 17-27